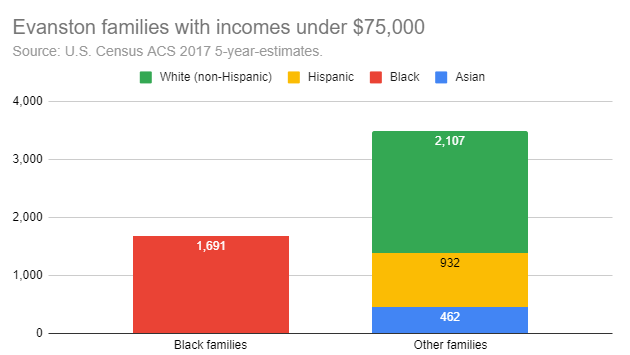 Evanston aldermen this week voted to spend up to $10 million on a program to provide yet-to-be-defined assistance to black residents in reparation for past discrimination.

Alderman Robin Rue Simmons, 5th Ward, the lead Council advocate for reparations, provided a table, reproduced below, citing the large difference in median income citywide between black and white households as a key rationale for the program.

Evanston already spends over $3 million a year on human services programs, which generally have income-based qualifications for persons seeking benefits.

The city has promised to provide an assessment of how equitably those programs distribute aid to individuals who are members of different racial and ethnic groups, but so far has not delivered it.

Rue Simmons has stressed economic development and promotion of entrepreneurship as key goals for the reparations program. She also has suggested the possibility of restricting benefits to residents who currently have low or moderate incomes, but the specifics of the program have yet to be defined.

If we chose $75,000 — just over the median household income in Evanston — as the cutoff for a “low and moderate” income category, the chart at the top of the story shows that black families are just under a third of the families in Evanston who fall beneath that income cutoff.

Cut the threshold to $50,000 and the chart below shows that black families are about 40 percent of the families in Evanston who fall beneath that income cutoff. All the charts are based on data from U.S. Census American Community Surveys for the period 2013-2017.

Here’s a more detailed look at the distribution of family incomes by racial or ethnic group in the city.

What becomes clear from the chart is that Evanston has families of all races and ethnicities who have low to moderate incomes — but that white residents predominate at the highest income levels.

So far charts in this report have looked only at families — which are defined by the census as a household that has two or more members who live in the same dwelling unit and are related by birth, marriage or adoption.

The broader category of households includes one or more persons living in the same dwelling unit.

If we base the analysis on households, far more whites fall into the low-to-moderate income group. But Evanston, as the home to a major university, has many student households, who are predominantly white and who observers may judge to be only temporarily poor and thus deserving of exclusion from the tally of those in need.

The available census data doesn’t provide a way to exclude student households from the household tally, although students living on campus in dormitories are not counted in the household data.

Whether one considers $10 million in spending over a projected 10-year term for reparations, or more than $30 million in other human services program spending over the same time period, it’s clear that the the city’s role in social uplift is limited — given that total city spending will be in the range of $3 billion in the next decade.

But it’s important to carefully track all such spending to assure that all residents in need receive an equitable chance to benefit, whether they can claim descent from slaves or not.