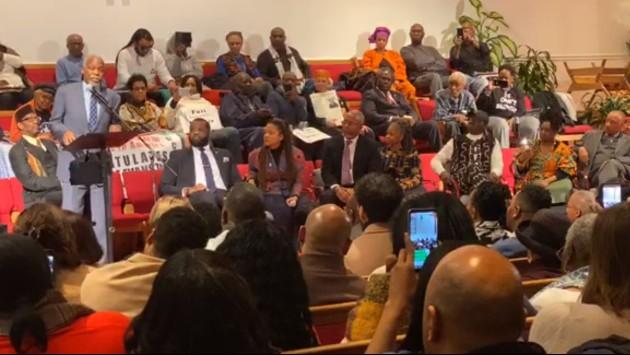 A crowd police estimated at over 600 people turned out for a town hall meeting on reparations Wednesday night at First Church of God on Simpson Street in Evanston.

“This is an extraordinary moment for us to celebrate,” the featured speaker, actor and activist Danny Glover, told the group.

Praising Alderman Robin Rue Simmons, 5th Ward, and others who “have stood up and put their foot in the fire” to raise the reparations issue, he said, “this conversation we have right now is at the beginning of the work that has to be done.”

Judge Lionel Jean-Baptiste, a former Evanston 2nd Ward alderman, broke into tears and was comforted by other speakers on the platform as he recounted the history of slavery in the Americas, describing “the rape and dismemberment, the whips and lashes” and how the people of Haiti achieved the first major victory against slavery, winning that country’s independence from France in 1804.

“Evanston people have stood up and built alliances,” Jean-Baptiste said, “black, white and others” to fight against segregation “and build a better society and community.”

Rue Simmons promised to hold meetings “with stakeholders and community members to weigh in on what we need to do to get this right.”

She said her City Council colleague, Alderman Ann Rainey, 8th Ward, “has been fantastic in support of this work.”

“She’s been an equal housing rights advocate” for decades, Rue Simmons added, “and is the sort of ally we’ll need to get this work done.”

She also noted that the City Council vote to establish a reparations fund and fund it with money from the city tax on recreational marijuana sales was 8-1.

Since that money isn’t expected to start arriving in the city’s coffers until next September, organizers like Rue Simmons believe they still have considerable time to sort out details of the program’s operation.

Organizers of the rally initially asked would-be attendees to sign up online for tickets.

But when the number of signups far exceeded the 750-seat capacity of the church, they changed plans, announcing that the tickets would not be honored and that admission would instead be first-come, first-served with the doors opening two hours before the event.