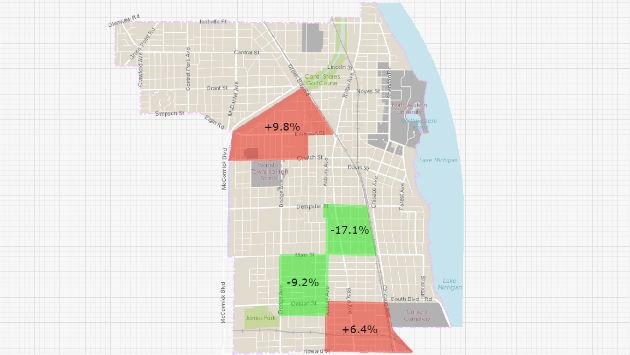 An in-depth study by the Chicago Tribune finds that Cook County’s property tax assessment system unfairly penalizes the poor while giving tax breaks to the rich.

The map above shows the four census tracts in Evanston with the greatest disparities identified in the Tribune study.

The other 14 census tracts in Evanston ranged from 0.6 percent overvalued to 8.2 percent undervalued, Most north shore suburbs had no over-valued tracts and even more undervalued ones

The Tribune found even greater disparities in other parts of the county — especially in the City of Chicago where the vast majority of census tracts were either dramatically under or over-valued and the pattern was strongly correlated with race and income levels.

The report sharply criticized County Assessor Joseph Berrios for failing to implement a new assessment system which the paper says could have dramatically reduced the discrepancies.

It also argues that the property tax appeal process tends to increase the income-based disparities because more well-to-do taxpayers are more likely to appeal and win tax reductions,

If you’re interested in appealing your tax assessment, the City of Evanston has an Assessment Review Office that can help with the process. More information is available online.