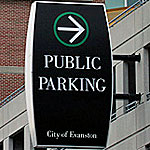 The company that manages Evanston's parking garages says the city is under-pricing both garage and on-street parking by millions of dollars a year.

Daniel Lassiter of Central Parking System presented a study to the Transportation/Parking Committee Wednesday night suggesting Evanston could raise nearly $1 million in additional revenue by adjusting hourly rates in the garages, while keeping the maximum daily rate the same.

And he suggested raising parking meter rates downtown from the current 75-cents an hour to between $1 and $1.50, with the lower rate charged around the edge of the downtown area.

The report didn't estimate how much money the higher meter rates would generate.

But city staff says the city has roughly 1,200 parking meters downtown which are said to be almost fully occupied during the business day.

Assuming eight hours of usage a day on weekdays, increasing meter rates to an average of $1.25 might yield $1.2 million in additional revenue per year.

The report included data on meter rates charged in 2008 in 38 major cities and said they averaged $1.23 per hour. Lassiter added that several of those cities have increased their rates since.

The committee's chair, Alderman Melissa Wynne, 3rd Ward, said most people don't compare Evanston rates to major cities, but to nearby suburbs like Skokie and Wilmette where parking costs less or is free.

"Looking at it as an alderman, the idea of increasing parking meter rates to $1 an hour would face a lot of community resistance," Wynne said.

Lassiter's proposal would eliminate the first-hour-free promotion in the garages, but by raising nearby meter rates to $1.50 an hour, a fee of $2 for two hours of garage parking would still be substantially less than the cost of parking on the street.

"We have lots of hair salons and restaurants," Chatz said, "and the ideal would be to allow three-hour parking on the street so someone could have their hair done and go to a restaurant wihtout fidgeting about the parking meter expiring."

Local business owner Paul Giddings said that with current meters, a higher rate would be a problem.

"We've got to get away from someone having to bring eight quarters to downtown," Giddings said. "That's the most irritating. I keep turning to the right with all the quarters in my pocket."

Assistant City Manager Marty Lyons said new revenue from higher rates could fund bonds that could pay for new parking devices that would let people pay with credit or debit cards rather than a stack of quarters and would also give the city more flexibility in setting meter time limits.

Lyons said the money could also be used to fund a more aggressive marketing program to bring shoppers into the downtown area.

The city plans to launch an experiment next week with a solar-powered "pay-and-display" parking machine on the south side of the 600 block of Clark Street.

The machine is being provided by its manufacturer for a two-month test at no charge to the city, Voss added.

One limitation of the solar-powered device is that it doesn't produce enough power to operate machinery to accept dollar bills.

Fiske, who operates a pet supply store in the 1000 block of Davis Street, said "I'm not sure where the problem areas are downtown, but I know that west of the tracks there's so much open parking it's alarming."

"Revenue for is down and people are working very hard to keep their businesses open," she said. "If we raise rates, we'll get a ton of complaints about driving people away."

But Alderman Coleen Burrus, 9th Ward, said "We need to get rid of the meters" and use the multi-space pay boxes.

"If I swipe a card I don't think about the money. Carrying that change around is unbelievably ridiculous."

The problem, Burrus suggested, isn't the money, it's the method people have to use to pay, although she added that she doesn't necessarily want to raise meter rates.