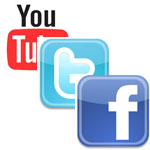 In response to a Freedom of Information Act request filed by a Chicago TV station, the director of the city's information technology division, Jose Calderon, says that on average city workers spend only a few minutes a day on major social media sites.

For the period Jan. 1 through July 12 this year, which included roughly 137 work days, not excluding holidays:

City Manager Wally Bobkiewicz says he reviews employee computer usage reports every six months — and he has run across some abuses that have led to employees being disciplined.

But he says those abuses have tended to involve fantasy football and baseball sites and political news and opinion sites rather than social media sites.

Calderon says the city now makes extensive use of social media to communicate with local residents, workers and visitors to Evanston.

That includes running eight Facebook pages with city news from different departments, three Twitter feeds and the city's YouTube channel, which some employees have to review as part of their regular job duties.

Bobkiewicz also says the amount of Facebook time shown may be higher than for the other sites because Facebook maintains an live connection as long as it is open in a browser window, even if the worker is actually looking at something else.

The data provided in response to the FOIA request doesn't provide an indication of the range of usage by different workers, only the aggregate and average numbers.