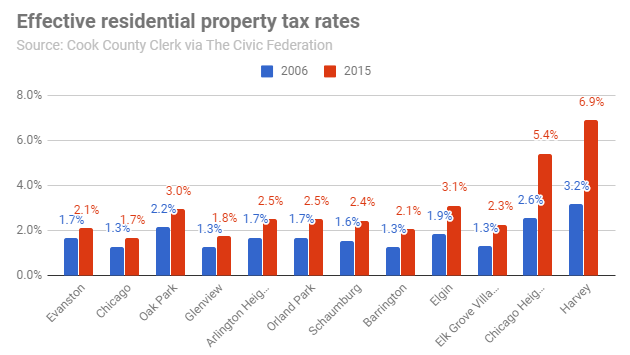 A new report from The Civic Federation says Evanston had the smallest increase in its effective property tax of a dozen Cook County municipalities studied during the period 2006 to 2015.

The group, analyzing data from the Cook County Clerk’s office, says the effective tax rate on residential property in Evanston rose from 1.65 percent of the property’s value in 2006 to 2.10 percent in 2015 — a 27.8 percent increase.

That 2015 levy figure is for taxes to be paid in 2016 and it includes taxes from all the govenment bodies imposing a property tax levy.

Chicago, starting from a rate lower base than Evanston, increased its tax rate just slightly more than Evanston during the period, by 27.9 percent.

The effective tax rate, The Civic Federation says, is the percentage of a property’s value that a typical residential property owner would pay in taxes — before deductions for homeowner’s or other tax exemptions.

It’s distinctly possible that Evanston will lose its smallest increase distinction in next year’s calculation, when the impact of the School District 65 property tax hike approved by voters last spring shows up in The Civic Federation’s report.