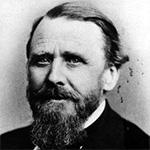 A new report says Northwestern University founder John Evans — after whom Evanston is named — had no advance knowledge of a massacre of Indians that occurred while he was governor of the Colorado territory.

But, the report concludes, he later defended the massacre and profited personally from the exploitation of what had been Indian lands.

In the Sand Creek Massacre, U.S. Army cavalry soldiers slaughtered about 150 Cheyenne and Arapaho Native Americans, most of them women and children, on Nov. 29, 1864.

Evans was the governor and superintendent of Indian Affairs of the Colorado Territory and was traveling in the East at the time of the massacre. He was forced to resign in its aftermath.

He had been a leader in Northwestern's founding in 1851, was chair of its board of trustees for more than 40 years and was a major donor to the school.

The 113-page report, available online, is the work of a committee of senior scholars from Northwestern and other schools. Carl Smith, an NU professor of English, American Studies and History, chaired the group. Members of the committee were:

No known evidence indicates that John Evans helped plan the Sand Creek Massacre or had any knowledge of it in advance.  The extant evidence suggests that he did not consider the Indians at Sand Creek to be a threat and that he would have opposed the attack that took place.

John Evans nonetheless was one of several individuals who, in serving a flawed and poorly implemented federal Indian policy, helped create a situation that made the Sand Creek Massacre possible.

In this regard, the most critical of his errors was his failure to fulfill his responsibility as superintendent of Indian affairs to represent the best interests of Native people in Colorado.

The most significant instances of this failure were his response to the skirmishes that occurred in the spring of 1864 and, especially, his conduct during and following the Camp Weld meeting [a conference with Cheyenne and Arapaho leaders who were seeking peace] in late September.

John Evans’s conduct after the Sand Creek Massacre reveals a deep moral failure that warrants condemnation. While he denied any role in the massacre, he refused to acknowledge, let alone criticize, what had happened, even going so far as to defend and rationalize it.

Regardless of Evans’s degree of culpability in failing to make every possible effort to protect the Cheyennes and Arapahos when they were most vulnerable, his response to the Sand Creek Massacre was reprehensibly obtuse and self-interested.  His recollections of the event displayed complete indifference to the suffering inflicted on Cheyennes and Arapahos.

John Evans did not profit from the Sand Creek Massacre. On the contrary, the massacre cost him both politically and financially. He did profit in a broader sense from his policies toward Indians when he was governor, however, since in the years that followed he was a full participant, along with many others, in the effort to develop the western and national economies that was profoundly damaging to Native people and remunerative to individuals like himself.

Although quantifying the portion of John Evans’s substantial contributions to Northwestern that resulted from his policies toward Native peoples is difficult, such a connection existed.  The University should recognize that, just as Evans profited from the development of the western and national economies in the late nineteenth century, so did Northwestern University and many other institutions.

John Evans deserves institutional recognition for his central and indispensable contributions to the establishment of Northwestern and its development through its early decades, but the University has ignored his significant moral failures before and after Sand Creek.  This oversight goes against the fundamental purposes of a university and Northwestern’s own best traditions, and it should be corrected.

“We very much appreciate the significant effort that the committee members made in researching and writing this important study,” NU Provost Dan Linzer said in a statement. “By asking a group of distinguished scholars to do this research, we were confident that we would receive an unbiased and thorough report, and I look forward to reading it.”

The committee’s investigation included a visit to the massacre site in southeastern Colorado, research in numerous archives and libraries, and discussions with other scholars. The research effort took more than a year. The conclusions constitute the last chapter in a 60,000-word document that discusses the massacre and Evans’ relation to it in their broader historical and cultural contexts.

Smith emphasized that the committee was given complete independence in its work and that no Northwestern officials reviewed the report before it was released Thursday. “This report is solely the work of the study committee,” he said. “It is based on extensive research and multiple discussions among the members of the committee.”

“This report will be very helpful in informing the work of the Native American Outreach and Inclusion Task Force,” said Patricia Telles-Irvin, vice president for student affairs and co-chair of the task force. “We will read the report carefully and develop the appropriate responses to this information as we move forward on our work.”