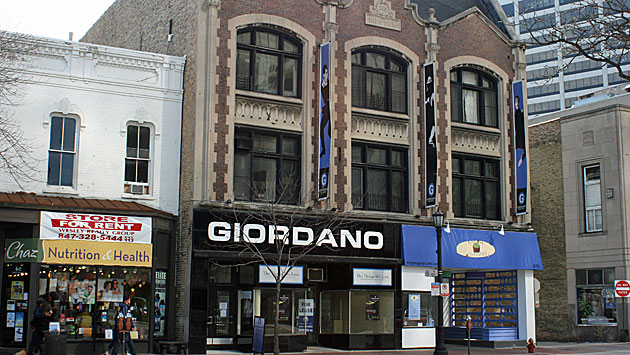 The final report from the consultant studying the potential for developing a downtown Evanston performing arts center suggests the former Giordano's dance studio as the most promising location.

The report adds that while the Varsity Theatre building might become the home for one or two theater groups, the desire of the building owner to maintain its first floor retail uses makes it inadequate as the primary site for arts activity downtown.

The report by consultant Kennedy Smith is part of a $50,000 city-funded effort led by Downtown Evanston to explore reuse of the Varsity and the potential for other arts development downtown.

The final report's conclusion represents a shift from a preliminary report presented in May that was more optimistic about the Varsity site.

Further research, the report says, revealed that because of the space restrictions at the Varsity, much of the remaining ornamental plasterwork and other detailing would likely have to be removed to convert it from its former movie-house role to a setting for staged theatrical productions.

That, in turn, would likely mean the project couldn't qualify for historic preservation tax credits that would be a key to funding it.

The report says the Giordano's building could more easily qualify for the tax credits and, because it is located in a tax increement financing district, could also use that as a funding source.

The report also discusses the use of the former Border's book store at 1629 Orrington Ave., a vacant lot at 605 Davis Street, a building at 1012-1016 Church Street and the downtown post office as other possible arts center venues.

The report says Evanston already is a substantial producer of theater performances for the region — generating, according to U.S. government statistics about nine times as much theater revenue as its own residents spend on performing arts and film entertainment.

About two-thirds of the estimated $43.6 million in revenue comes from taxable entities — primarily the Century Theatre complex — with the rest from tax-exempt theater groups.

The report says that in addition to several theater groups housed at the Noyes Cultural Arts Center that could expand into larger quarters, at least two other theater groups in the region — the Northlight theater in Skokie and the Glass Onion Theatre in Chicago — would like to move to Evanston.