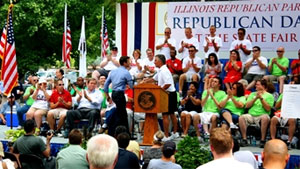 SPRINGFIELD — While Illinois Republican leaders talked of party unity, candidates and county chairmen addressed the impact of the state's new redistricting map and the growing allegiance with the tea party.

SPRINGFIELD — While Illinois Republican leaders talked of party unity, candidates and county chairmen addressed the impact of the state's new redistricting map and the growing allegiance with the tea party.

Nearly 200 Republicans gathered at a hotel here, ahead of their party's annual rally at the 158th Illinois State Fair on the Director's Lawn in the fairgrounds.

The message from Republican County Chairmen Association President Randy Pollard was that the unity and hard work will translate into success in 2012. Pollard coordinates efforts, on a county-by-county basis, to get Republicans elected.

"We are coming together as a party, to build the Republican Party," said Pollard on Thursday morning.

But as Pollard rallied his county chairmen, some of next year's likely candidates were trying to rally support for possible battles against each other.

Because they controlled both chambers and the governor's office, Democrats crafted the new redistricting map that lumped together several GOP incumbents into districts, which could lead to competitive primary elections.

However, "that's the great thing about primaries," said state Sen Sam McCann, R-Carlinville. "Primaries force good candidates to run good races. The cream has to rise to the top."

State Sen Sam McCann, R-Carlinville, was drawn into a new district that will include Springfield and a chunk of western Illinois, meaning he will have to court thousands of new voters.

He is, however, likely to avoid a primary contest with Springfield's current Republican state senator, Larry Bomke, who has signaled he will not seek re-election under the new political map that was approved in May. Every 10 years, the legislative and congressional districts are revisited and are redrawn to reflect a shift in population according to U.S. Census Bureau data.

Illinois Republican Party Chairman Pat Brady said "only a couple" incumbents will square off against each other, but he said he doesn't think there will be many problems.

"Each county chairman is going to want resources and support for the race that is important in their county," Pollard added.

Verschoore, the incumbent Democratic state representative, voted for the income tax increase earlier this year. He said at the time that raising taxes "was the right thing to do."

Carpentier also said she wants candidates for the Rock Island County Board, some of whom may run on the Republican ballot with tea party support.

"Two of our candidates are tea party members," Carpentier added. "We will certainly be working with (the tea party) in 2012."

Brady said the Republican Party and tea party are working together, because "a lot of these fiscal issues that we care about, the debt, the deficit, the inefficiencies of government, we agree with them."

LaSalle County Tea Party organizer Art Havenhill said he welcomes the Illinois Republican Party's help, but the tea party does not want to be part of the GOP.

"The establishment is not something we're interested in, in its current form," Havenhill said.

Havenhill said Illinois' tea party groups will have their own rally in late September in the Chicago suburbs.

Illinois Democratic County Chairmen's Association President Allan Pirtle said the alliance between the Republican Party and tea party does not concern him.

"I think that people, after 2010 especially on the national scene, have seen what the Republican Party and their candidates are all about — obstructionism and trying to score political points, not doing what's right for the country," said Pirtle.

The political strategizing came hours before the GOP loyalists descended on the Illinois State Fair for their annual political rally.

A crowd of a few hundred dotted the Director's Lawn at the fairgrounds here. The subdued rally saw as many people sitting in the sun as listening to the speakers.

The GOP faithful said they expect a much larger crowd in 2012, when it's an election year.