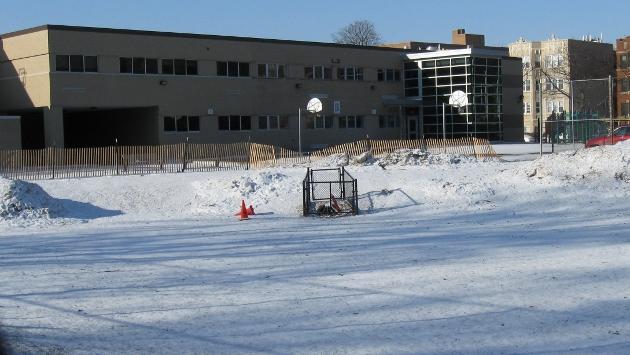 A storm water retention pond that once doubled as a playground for Lincoln Elementary School in south Evanston may be rehabilitated, thanks to the persistence of the school’s PTA.

PTA representatives Lisa Fontoura and Sarah Laing, along with a consulting civil engineer, Thomas E. Rychlik of Gewalt Hamilton Associates, Inc. made a presentation Monday night to the Finance Committee of the Evanston/Skokie District 65 School Board.

They noted that a nice, grassy, street-level playing field once adorned the northeast corner of the school property at Forest Avenue and Lee Street, but when the school was renovated in 2012 to accommodate a growing enrollment, the city advised them that, under a new Storm Water Control Ordinance, the district would have to provide a water retention area as part of the project.

No exceptions were allowed, as the ordinance was considered necessary to implement $210 million in city sewer improvements to mitigate sewer backups in the area’s homes.

Because this had not been planned or budgeted for at the time the school renovation project had begun, the district had little choice but to convert the playground into a water retention pond, sunken below the street surface, with steep side walls and a drainage sewer outlet that was protected by a wire fence.

Although the school attempted to use the yard for physical education classes, there were a number of injuries sustained, including some that required hospitalization. On top of that, the field was unusable during a rain storm and often for as long as four days after, due to residual mud.

During the winter, even though students are expected to exercise outdoors when the temperature exceeds 20 degrees, the icy side walls formed an additional hazard, the PTA contingent said.

As a result, the entire 25,800-square-foot retention pond was closed, leaving only a basketball court and surrounding play area totalling less than 15,000 square feet, for outdoor use by the school’s 534 students.

The best solution, the group said, would be to spend $463,000 to install underground concrete storm water retention tanks covered with dirt and grass, resulting in a play field that would be usable year-round.

Recognizing that such an expense might not be possible right away, they proposed an interim step, at a much more modest cost of $17,000, that would involve new soil application and plantings that would increase absorbency and result in less standing water and mud.

The problem with the cheaper alternative is that it would not address the slope, accessibility, and safety concerns, particularly in winter, and does not level the playing field.

The PTA suggested that the district could reduce the costs of the more expensive alternative by applying for a grant from the Illinois EPA under its Green Infrastructure Grants Program for Storm Water Management.

They further suggested that the project might postpone and ultimately absorb the $40,000 currently allocated to resurfacing the teacher parking lot.

Also, they said, consideration might be given to water harvesting and rescue similar to a project at Evanston Township High School, in possible collaboration with local green/sustainability efforts.

While the Finance Committee only makes recommendations to the full board, there appeared to be sympathy within the committee for the plight of Lincoln School and a willingness to consider the group’s recommendations, both as a temporary solution under the $17,000 option, and for longer term exploration in the district’s capital budget.