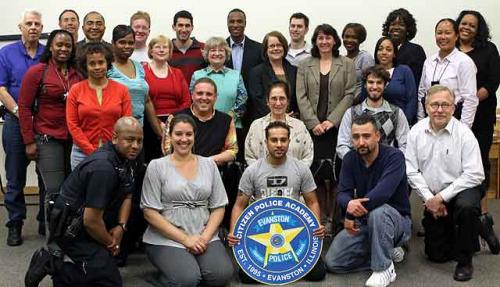 The keynote speaker was Mayor Elizabeth Tisdahl, and Colleen Burrus, the newly elected alderman of the ninth ward, was one of the graduates.

The mayor thanked the graduates for giving back to the community and remarked that “what you did is wonderful and important. You are becoming and important part of community outreach for the police department.”

She added that “Evanston is a diverse community and I think that diversity is our greatest strength and is also our challenge.”

Diversity was a recurring theme throughout the evening. Speakers noted that the class was a racially, ethnically, and occupationally diverse group. Other speakers included members of the police department, and a class representative, Sandra Byrnes.

Graduates said that the program was more then they expected when they started. They made new friends from their classmates, and got to know members of the police department personally. There was opportunity to speak to the officers one on one, as well as during the class session. The course opened their eyes to the variety of calls that the police respond to and how situations are handled.

The Citizen Police Academy is offered twice a year and runs for 12 weeks. The next course will start on Thursday, Sept. 3. Each weekly session runs for 2 hours, plus a 4 hours ride-along with a patrol officer and an in-depth look at the Communications Center. Classes include presentations from each bureau in the department and the states attorney’s office, as well as a chance for interactive role playing.

Since the program started in 1995, 655 students have graduated and 264 have joined the Citizen Police Academy Alumni Association. Members of the association volunteer at the Police Department as well at other citywide activities, and 42 of them have been selected and trained for the Evanston Community Emergency Response Team.