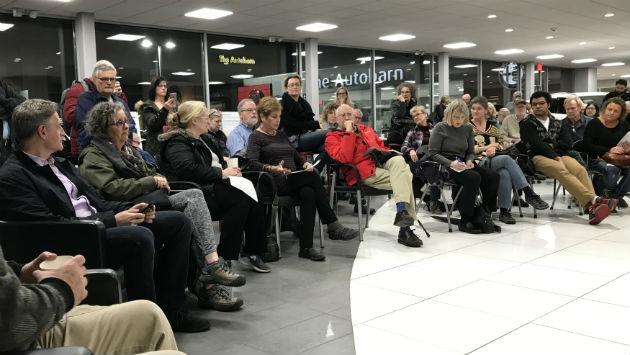 About 60 Evanston residents offered suggestions for redevelopment of the 1000 block of Chicago Avenue at a community meeting Thursday evening in the Autobarn Fiat showroom.

Alderman Melissa Wynne, whose 3rd Ward includes the site, organized the meeting to let residents meet with owners of the properties on the west side the block — Richard Fisher of Autobarn and Oscar Tatosian of Oscar Isberian Rugs.

Fisher said he intends to move its “noisy, smelly” auto repair activities to Autobarn’s new location off Howard Street and move its sales offices to three buildings on the east side of Chicago Avenue, leaving the Autobarn Fiat and Nissan showrooms and lots on the west side vacant.

An aerial view, with the properties on the west side of the 1000 block of Chicago Avenue highlighted. (Google Maps)

Tatosian said the Isberian Rugs store at 1028 Chicago Ave., opened by his grandfather in 1928, doesn’t offer the best customer experience and he would like to have a more attractive showroom.

“This will not be a public park. I want to take that off the table,” said Wynne. “This is private property and it is prime property and we want to make it productive for them.”

“We would like to see the Chicago Avenue streetscape more beautiful,” Fisher said. “There’s an opportunity if we put the Fiat property, the Isberian property, the Nissan property, Mo’s property and maybe even beyond, to do a beautiful development” that might have restaurants, retail, hospitality, condos. “We don’t know, but it could be wonderful to be part of. That’s as far as we’ve gotten.”

“We’ve learned that it’s probably not the best process to do all the drawings for a 20-story building or whatever and then have a fight for two years,” he said. “We’d like to flip that over and have the conversations now and be with everybody while still being practical.”

Johanna Leonard, the city’s director of community development, said part of the block is zoned C1a, which allows mixed use, and part is zoned C2, which is more restrictive.

Leonard asked meeting attendees to break into groups of no more than 10 to identify priorities and challenges for developing the site and report back to the group as a whole.

Most groups wanted wider sidewalks, better lighting and more greenery and desired that the buildings be set back from street with all parking enclosed within the building to minimize competition for parking on the side streets.

Some residents were concerned about businesses dying because of online shopping and wanted to encourage interesting shops and retail to make the area a more walkable part of the Main-Dempster Mile.

“People on the street help activate a neighborhood,” said one resident.

Several residents opposed any zoning variance for the development. Residents also expressed concern about the size of the apartments or wanted a mix of apartments and condos, since some believe apartment owners aren’t as much part of the community.

One group added that they building should be sustainable and LEED certified. Another group suggested the building could be the home of Northlight Theatre or a youth theater.

A couple of groups wanted a rooftop or at least outdoor dining area, using heat lamps and other means to extend the outdoor season

“I’m assuming this will be residential,” said one attendee. “I want to challenge the owners to be more creative. Do we need more apartments? Is anyone interested in office space here?”

Leonard asked attendees to complete a visual preference survey, indicating which styles of buildings might be appealing, and said notes from the meeting would be available on the city’s website.

Fisher thanked residents for attending and for their comments. Then he said, “This is private development, not community development. If we don’t change the zoning we may not even bother. And I don’t know how any developer would monetize a theater.”

“But are we satisfied with what we have now?” he asked. “Any change will be one thousand percent better.”