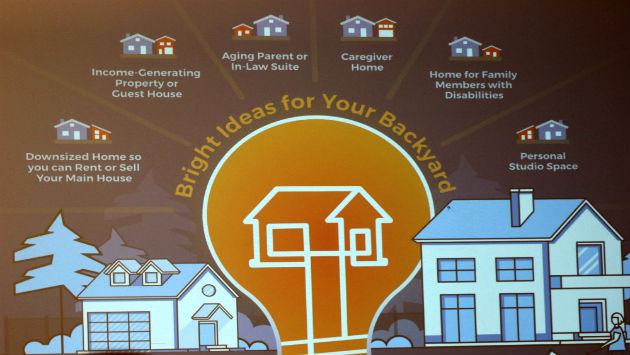 A few dozen people gathered at the Levy Center Wednesday evening to learn about the potential for building coach houses, or accessory dwelling units, in Evanston.

The event was sponsored by the AARP and the Evanston Development Cooperative.

Terri Worman, associate director for advocacy and outreach for the AARP in Illinois, said the housing that communities have today doesn’t correspond to what’s needed by many residents.

Aging baby boomers, she said, generally want to stay in their community, but not necessarily rattling around in the big house they have now. And building an accessory dwelling unit on the property provides one potential answer, Worman said.

She added that regulations for accessory dwellings vary widely — from the situation in Minneapolis, which has just eliminated its single family zoning restrictions, to Chicago where ADUs are illegal.

Seventy-nine percent of the housing in Chicago is on single-family lots, Worman said, so legalizing ADUs would create the potential for lots of new housing.

Evanston is somewhere in the middle between Minneapolis and Chicago. Here detached accessory dwelling units — like coach houses built over a garage — are legal because of a recent zoning change — but attached ADUs — a second unit that shares a wall with the primary dwelling — are not.

Evanston also has various building lot coverage, setback and parking restrictions which limit where ADUs could be built, but Dick Co, president of the Evanston Development Cooperative, says about half the single family lots in Evanston do have room for an ADU under the city’s current zoning.

Co said ADUs can be a part of the community’s affordable housing solution, addressing the need for more housing for residents frequently described as “the missing middle” — who make close to the area median income but can’t afford most of the available single family housing stock.

He said EDC plans to build ADUs from prefabricated panels that make it possible to erect a building quickly. But he said the cost of one of those ADUs could be in the range of $200,000 — which makes it unfeasible to provide them for low-income residents without substantial subsidies.

He said homeowners could finance the addition of a coach house to their property through a variety of options.

Co suggested that homeowners who wanted to move into the ADU themselves could repay money initially borrowed to build it by renting out the primary residence on the lot or forming a homeowner’s association for the property and selling the primary house as a condo unit.

He suggested ADUs offer an option for making it possible for more people to enjoy the benefits of living in Evanston while reducing the trend of building McMansions.

He said the co-op currently has 28 members and is seeking new ones. It has a seven-member board, with four of the seats held by workers who actually would be building the new homes.

He said the co-op anticipates breaking ground on its first ADU next spring and hopes to building four to five units over the course of the coming year.