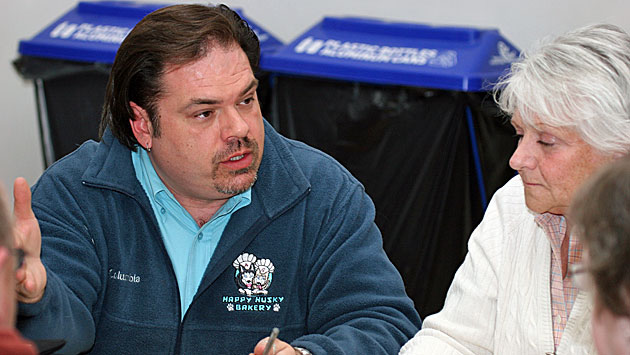 Evanston residents offered sharply differing views at a public meeting this evening about the merits of ordinances to ban or tax disposable shopping bags.

Todd Ruppenthal (pictured above), owner of the Happy Husky Bakery and president of the Central Street Business Association, said the best ordinance would be no ordinance at all.

He said even an extra charge for bags of a few pennies would anger shoppers and cause them to avoid shopping in Evanston.

He suggested the city should focus on educational efforts and incentives for creating a greener and more ecologically conscious city.

"Using the carrot instead of the hammer is always the best choice, for both consumers and businesses," Ruppenthal said. 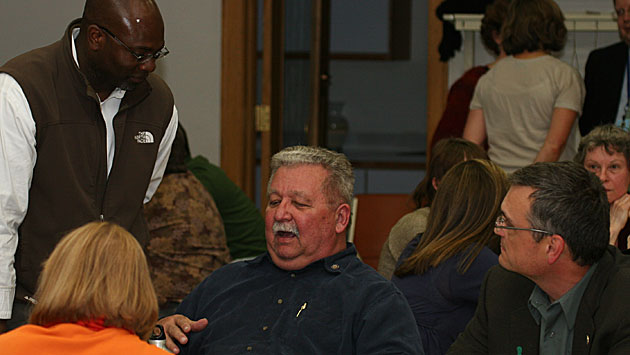 Speakers who summarized the results of small group discussions during the meeting saw positive potental effects for a ban — ranging from fewer plastic bags stuck in trees to potential reduced trash collection costs.

One speaker said a ban would "create continuing prestige for Evanston."

"The goal is to modify behavior," he said, so a ban combined with an education campaign "is the best way to go."

Another said, "You have no right to have a plastic bag. We need to do something radical."

But other speakers suggested a ban would create complaints about "Big Brother in the grocery store" and said a tax or ban would be punishing to small businesses and tend to drive them out of Evanston.

Paul Giddings, co-owner of the Folkworks Gallery and a leader of the Chicago Dempster Merchants Association, said his table discussed eliminating just the cheapest plastic bags, but allowing more expensive ones.

That, the theory went, would encourage people to switch to paper bags that are more frequently recycled.

Mike Sullivan of Hilex Poly, said his firm operates the largest plastic bag recycling plant in the world in North Vernon, Ind. He argued that the solution to the bag problem is a comprehensive recycling program.

He urged support for SB102 in the state legislature which he said would promote bag recycling and create a lot of green jobs.

Patrick Rita of the Renewable Bag Council, which represents manufacturers of brown paper bags, said the city should not tax or ban paper bags because the industry is a leader in waste recovery and recycling.

He also claimed that rather than "saving trees," bag bans would lead tree-farm owners to shift to row-crop agriculture instead.

City Manager Wally Bobkiewicz said staff would return to the City Council's Administration and Public Works Committee meeting on June 13 with a revised proposal for how to handle the bag issue.