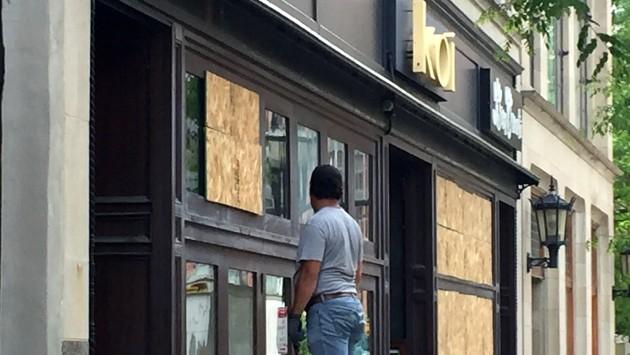 Less than 48 hours after the windows at a downtown Evanston restaurant were boarded up, the boards were taken down.

Plywood panels were placed over the windows at Koi Asian Cuisine late Wednesday afternoon, but mid-afternoon today, the boards were removed.  On Thursday, a Koi employee told Evanston Now it was the landlord’s decision to cover the windows, not the restaurant’s.

The city strongly urged the landlord to take down the boards, says Economic Development Manager Paul Zalmezak, and “They were very cooperative.”

Zalmezak says he, Mayor Steve Hagerty and aldermen appealed to the landlord, because Koi owner Sandy Chen “has always been an Evanston supporter and was devastated to have her business boarded up.” The same landlord is expected to remove the boards at Newport Coffee House on Monday.

Half a dozen downtown stores, a small percentage, had been boarded up, as a precaution against potential looting. Many American cities, including Chicago, have been hit with extemsove vandalism following peaceful protests over the police-involved death of George Floyd in Minneapolis. However, nothing like that has happened in downtown Evanston.

Restaurants in Illinois can continue to provide takeout or delivery. If possible, they can now serve food outdoors, as long as the tables remain six feet apart.  Social distancing remains in effect because the coronavirus pandemic is far from over.

No one knows that better than Elio Romero, the chef and owner at the Alcove-Evanston restaurant.  The Alcove, formerly Chef’s Station, re-opened this evening for outdoor dining.  Romero says he’s “excited.” He’s also healthy.

Diners on the patio at The Alcove this evening.

Romero says he came down with COVID-19 early on during the pandemic.  Romero had closed Chef’s Station, in the Davis Street Metra depot, in February, to change the decor inside to go with the new name.  But he says at least one of the workers was apparently ill, and the virus spread to him as well.

Romero says being sick was “pretty bad,” although he did not have to be hospitalized.  Romero spent two weeks in self quarantine, then waited another two weeks as an extra precaution before resuming redesign work at the restaurant, where he’s been for 20 years.  Romero had hoped to open in April, but the governor’s stay-home order kept restaurants limited to carry out and delivery until last Friday.

Romero’s dining room, as with those in other restaurants, remains closed.  The earliest indoor dining can take place is late this month, if coronavirus metrics continue to improve.  Outdoors, with social distancing, the Alcove can have 27 customers.  It used to be 40 to 45.

Dining al fresco this evening at Next of Kin.

Alcove is not the only downtown Evanston restaurant which opened for outdoor dining today. So did Next of Kin, which is on Davis Street. It’s across the street from Koi, where you can now look into the windows instead of at plywood boards.