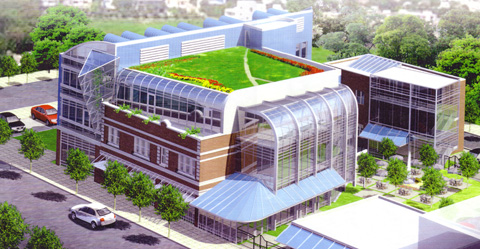 An aerial view of the project design looking northwest.

Mr. Cheifetz said he and city staffers are negotiating with Commonweath Edison, which owns the lot just west of the site at the northeast corner of Church and Brown Avenue. The utility has a power substation at the back of that lot, but he hopes to be able to use the front part for parking for the new development.

Assistant Community Development Director Carolyn Brzezinski and other city staffers at Wednesday’s Site Plan and Appearance Review Committee meeting expressed concern about the design of the planned parking area on the ComEd property — saying it would eliminate some existing on-street parking and would have cars backing out across a public sidewalk to reach the street.

She suggested moving the sidewalk to the east side of the parking area, to avoid the danger to pedestrians, if the property ownership issues can be worked out.

Mr Cheifetz said that the parking “is a puzzle that we have to figure out to move forward on the project. If we’re going to build something nice there, we’re going to need some additional parking to meet city requirements.”

He said he’s also talked with Sam Johnson, who owns the barbershop property just to the east. “Since the house behind the barbershop burned down, part of my discussion with him is whether we could use some of the space behind the shop for parking,” Mr. Cheifetz said. 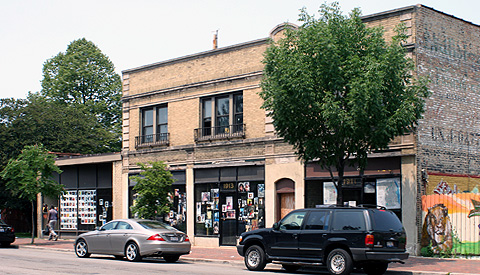 Community Development Director James Wolinski said the parking solution might resemble what the city recently approved for the Strange Lofts property on the northeast corner of Church and Darrow.

Alderman Delores Holmes, 5th Ward, said, “We’re spending a lot of money to plan for that area and parking is an issue. We may have to be creative and innovative — not only for this project but for anything else coming up in this area.”

“My biggest concern,” she said, “is getting something going over there.”

Mr Cheifetz said the development will seek to maximize its use of environmentally conscious building techniques.

Ms. Brzezinski praised the energy efficiency initiatives in the plan but said she thought the architectural design might be a little too commercial looking, not sensitive enough to the existing neighborhood and perhaps a bit dated in its appearance.

But Mr. Wolinski said, “We need something dramatic at Church and Dodge, to say dramatic new things are happening there.”

The developer’s next step is to seek a zoning analysis from city staff to determine just how much parking is required.

The Church and Dodge area is under a building moratorium that is scheduled to expire next month but may be extended to permit completion of a neighborhood planning process that’s just getting underway.

It was unclear at Wednesday’s meeting whether this project would be affected by the moratorium, since it calls for renovating existing buildings rather than new construction.