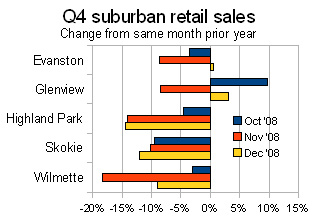 Retail sales in Evanston were stronger in the fourth quarter last year than in most surrounding communities, or in the nation as a whole.

That’s the conclusion of an analysis of state sales tax data reports by the Evanston Chamber of Commerce.

In the fourth quarter Evanston turned in a better performance than all north shore communities checked except Glenview.

It also turned in a stronger performance than other metro communities, including Arlington Heights, Chicago, Des Plaines, Oak Park and Naperville.

"The stability of major institutional employers like Northwestern University, and a diverse economy focused on health care and education appear to be resulting in a lower unemployment rate and less volatility," said Jim March, the chamber’s president and owner of Grotto Communications.

But with the figures showing year-over-year sales declines for two of the three months in the quarter, the chamber "also recognizes this is a challenging time for all businesses, including those in Evanston," the chamber’s executive director, Jonathan Perman, said.

He said the chamber is increasing networking activities and one-on-one counseling services for businesses to help struggling local firms.