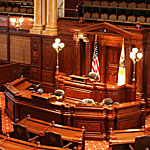 SPRINGFIELD — State retirees will see their health-care premiums increase as soon as July 1, under legislation that cleared the General Assembly today.

SPRINGFIELD — State retirees will see their health-care premiums increase as soon as July 1, under legislation that cleared the General Assembly today.

The state now pays more than $800 million annually for retirees' health care, and 90 percent of the those retirees pay nothing toward their health-insurance premiums.

"Illinois is by far an outlier state. We are one of only two states that offers anything like this, and we simply cannot afford it," state Senate Republican Leader Christine Radogno, R-Lemont said.

Gov. Pat Quinn said in a statement he intends to sign the bill.

The legislation allows the Illinois Department of Central Management Services to negotiate the premium rates annually with the American Federation of State, County and Municipal Employees Council 31.

Whatever CMS and AFSCME negotiates will be applied to retired lawmakers, retired judges and retired university workers.

If the Legislature's Joint Committee on Administrative Rules balks at the rate, AFSCME and CMS would return to the negotiating table.

State Sen. Michael Frerichs, D-Champaign, voted against the legislation. He represents much of the state's flagship college, University of Illinois at Urbana-Champaign.

"There are still a lot of very important questions" about how this will work and who it will affect, Frerichs said.