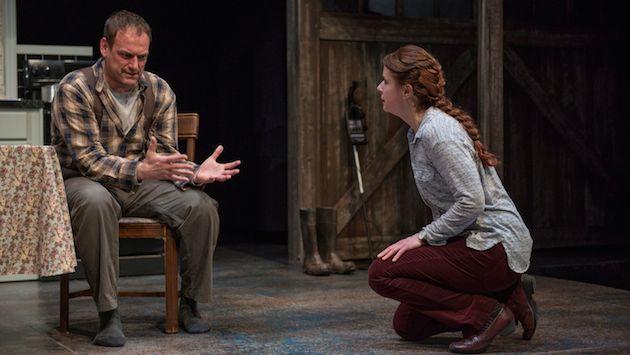 Best known as the writer of “Moonstruck” and “Doubt”, John Patrick Shanley strums a heartfelt chord with “Outside Mullingar.” With this production, Northlight Theatre provides the acting chops and the intimacy for a truly wonder-filled performance.

John Patrick Shanley has run the gamut of thought-provoking and touching performance writing, leading to Tony, Oscar, and Pulitzer awards. He has, until recently, avoided writing about his Irish heritage, but something drew him back- just as the characters in “Outside Mullingar” are drawn back to the land and to one another.

A series of sharply insightful but altogether human scenes between two Irish families brings the younger generation to an appreciation of one another and of life, despite farm life’s caging qualities. In the best way, the script of “Mullingar” reminds us that it is okay to be small-town, to avoid the crowd, to be yourself, and to appreciate the little things. This funny and genuine script by Shanley is a piece to see now, especially because Shanley is working on the screenplay adaptation.

Northlight’s production has a few bumps along the road to a wonder-filled and altogether worthwhile ending. The two parents, played by Annabel Armour and William J. Norris, share the stage almost equally as members of an older and more “traditional” Irish generation. Both bring an enthusiasm and zing to their portrayals when facing off with one another. Norris has a bit more trouble bringing authenticity to his character in a scene with his son, played handily by Mark Montgomery. Shanley’s touching reconciliation scene between father and son comes off as haevy-handed because of the older Norris, who puts far more energy into the aging patriarch than seems necessary for impact.

Montgomery and Kate Fry, who play the left-behind younger generation of modern Irish farmers, create touching moments on an over-populated stage. Indeed, it seems at times that the design is struggling against the actors, particularly in an outdoor scene in which the actors nearly have to shout over the clumsy sound design of cackling birds.

Shanley’s play is grounded in a real Ireland, but transcends that setting to the point that complete realism in design makes less and less sense as the play goes on. However, Northlight’s acting talent more than makes up for the “stark realism” of this design.

All of the goodness that is in Shanley’s play and Northlight’s production comes together in the final scene between Fry and Montgomery. Despite their pride and inability to voice their emotions, these two Irish folk finally find one another and a way to be happy in the small-time countryside, reminding us all to be true to ourselves and to our origins.

"Outside Mullingar" runs now through April 19th, with performances throughout the week at Northlight Theatre in the North Shore Center for the Performing Arts: 9501 Skokie Blvd, Skokie.