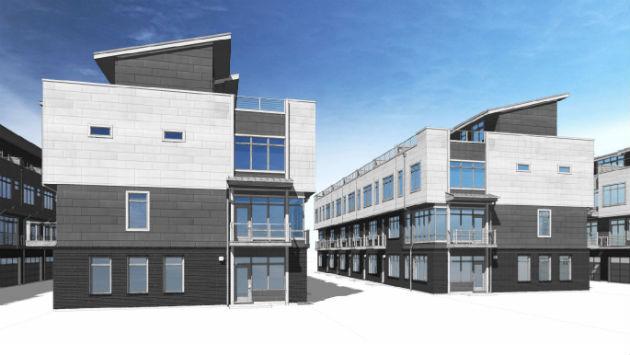 Plans to build 40 townhomes on the former Dard Products property at 912 Custer Ave. are scheduled for review by Evanston’s Design and Project Review Committee on Wednesday.

The Evanston Commons plans call for a mix of two- and three-bedroom units. Each unit would be spread across four floors with a two-car garage and some living space on the ground level, the main living-dining and kitchen area on the second level, bedrooms on the third level and a roof-top terrace and an extra “attic” room on a partial fourth level.

A flat portion of the roof would feature green-roof plantings, while a sloped section would have solar panels.

A site plan for the development, with Custer Avenue shaded at the bottom. Vehicle access to the units would be from the alleys, but a grassroad paver path would permit Fire Department vehicle access from the street. Permeable pavers would be used for the garage access lanes.

The planned development will require several site development allowances, including for the number of units, building height and setbacks.

The zoning would also require that all townhouse units face the street — but the developers say that would be “a design mistake,” because it would also mean the units would face the Metra and CTA tracks across Custer from the site.

Looking out on the adjoining units, the developers say “is a far better visual persepective than looking at the RR right-of-way.”

The proposed townhouse development was unveiled last summer as part of a two-site development that would also have built rental apartments on what’s now a city parking lot on the block that faces Main Street.

The Dard site on Custer and the city parking lot site on Main Street highlighted in Green (Google Maps image.)

The parking lot development plan was dropped after business owners along Main Street complained that losing the parking would harm their businesses.

Developer Kevin Lee recently acquired the Dard site for $3.6 million. The construction cost of the townhomes is estimated at between $20 million and $25 million.

The developers are proposing to meet the city’s inclusionary housing ordinance requirements by making a fee in lieu payment or to provide rental housing at a separate site as an alternative.

The developers say the carrying costs for the townhouse condos would make it impossible for residents at the income levels targeted by the ordinance to afford them.

The planned development will also require review by the Plan Commission before moving on to the City Council for a final decision.