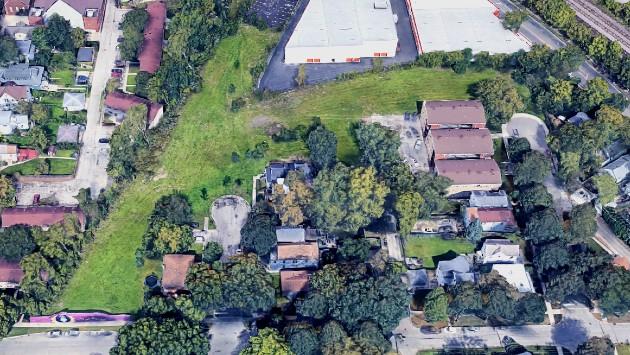 Evanston’s Plan Commission tonight is scheduled to consider a request to remove zoning restrictions imposed more than a decade ago that effectively block redevelopment of a section of abandoned railroad right of way.

The land that would be rezoned consists of three parcels in an area of the 5th Ward bounded by Simpson and Foster streets and Ashland Avenue and Green Bay Road on which a developer hopes to build townhomes.

The parcels represent a portion of the wye that connected the former Mayfair rail line with the mainline commuter rail tracks just east of Green Bay Road.

The bold red outline indicates the area being considered for the zoning change.

The 2007 West Evanston Master Plan called for creating a new street grid where it had been interrupted by the railroad — extending Jackson Avenue north to Simpson and establishing a new east-west street to connect Wesley Avenue with Jackson.

An illustration from the 2007 plan showing extensive redevelopment and the new street grid.

The plan, Community Development Director Johanna Leonard says in a memo to the Commission, was adopted at the peak of the real estate market when large-scale development projects seemed feasible. In 2009, shortly after the market crashed, the city added the plan’s requirements to the zoning code as part of a West Evanston Overlay District.

But the changes to the street grid envisioned by the plan “can only be accomplished if many separate properties are redeveloped at the same time,” Leonard’s memo says. And that would have to include the self-storage business at the southwest corner of Green Bay and Simpson — which is not currently for sale.

The developer, John Cleary of Chicago-based TEMP Capital Inc., has submitted a preliminary site plan for the property, showing how it might be developed if the overlay district zoning restrictions were removed.

A view into the site from Green Bay Road, showing the abandoned railroad viaduct abutment and the edge of the Public Storage building just north of the property. (Google Maps)

If the proposed zoning change is ultimately approved by the City Council, the developer’s townhouse proposal would still require review under the city’s planned development approval process.