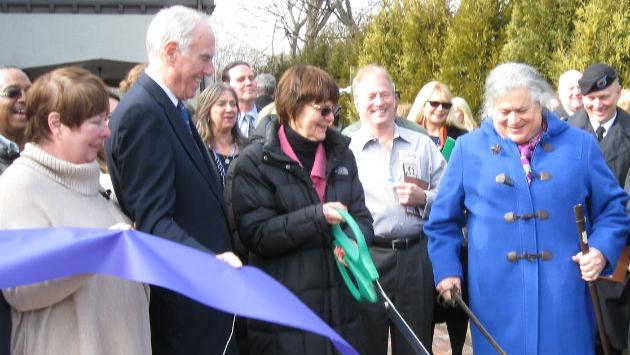 With the snip of a giant scissors and the slash of a sword, Evanston Mayor Elizabeth Tisdahl and billionaire philanthropist Jennifer Pritzker formally opened the second luxury bed-and-breakfast on the city’s central lakefront.

In remarks to a modest coterie of Evanstonia gathered at 1622 Forest Place on a chilly, but sunny, January afternoon, Pritzker reminisced about her grandfather’s house on Wellington Avenue in Chicago.

“It had such a rich family history,” she said, “and sadly a 20-story condo building stands there now.”

That experience made her determined, she added, “to bring new life to old houses by finding creative ways to make them community assets and viable long-term investments.”

Evanston has not made that journey an easy one for Pritzker, when the city rejected an ambitious plan of hers to convert the decaying Harley Clarke mansion, next to the Grosse Point Lighthouse, into a boutique hotel with added free parking that would have brought tax revenue to the city and would have enabled more Evanstonians to enjoy the adjoining park and beachfront. 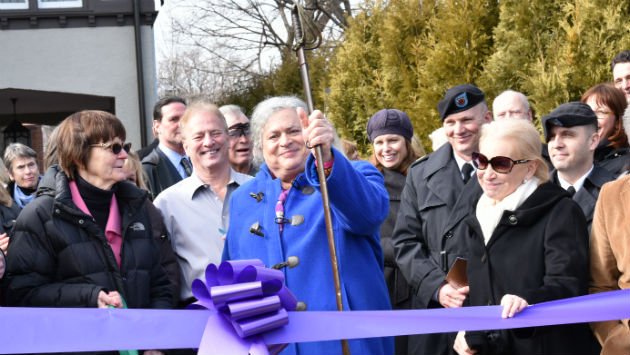 The retired army colonel, with sword. (Photo by Genie Lemieux-Jordan.)

Nevertheless, she purchased two mansions on the same block, opening one in 2014, called Stone Porch, and now  the Stone Terrace, employing a technique she described as breathing new life into old houses that would “contribute to economic development and enhance the prestige of the already exquisite City of Evanston.”

Now that they’re in operation, the facilities purchase goods and services daily from such local businesses as Bennison’s Bakery, Hoosier Mama, Homestead Meats, and Hewn Breads.

Longtime Evanston residents Tom and Sue Zipprich are the innkeepers of Stone Terrace. Tom is a gourmet chef who was the banquet coordinator for Misericordia in Chicago, and Sue is a retired schoolteacher.

Additional information about Stone Porch and Stone Terrace is available on their respective websites.

Neighbors get a peek at Stone Terrace