Bikers planning to ride down Ridge Avenue Oct. 26 will have less roadway to ride on than originally planned.

Public Works Director John Burke told aldermen Monday that completion of the repaving of the major artery through town has been delayed by extra work required to rebuild catch basins and other sewer structures beneath the street.

Davis Street will be closed at Ridge Avenue for a second day today as construction work continues on Ridge.

So only two lanes of the road will be open in the stretch from Main Street to Church Street when the "Bike the Ridge" celebration is held from 8 to 10 a.m. on the last Sunday in October. The full four lane width will be available for the southern stretch, from Howard Street to Main.

The aldermen Monday approved spending $8,000 to cover police overtime and other costs associated with the event. 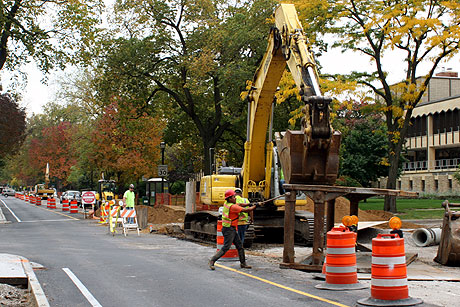 The repaved east side of Ridge is already open, but to only one lane of traffic.

Burke says the paving project now is scheduled to be completed by Dec. 15.