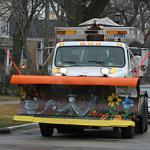 It looks like Evanston residents will be ushering out 2013 and greeting the new year with snow falling on their heads.

The National Weather Service has issued a winter weather advisory effective from 4 p.m. Tuesday through 10 a.m. Wednesday, with three to five inches of snow expected.

Evanston's Assistant Public Works Director James Maiworm says we'll get a bit of a preview tonight — with light snow starting around 8 p.m. and ending in the early hours of Tuesday morning. Just a half inch is expected from that storm.

Maiworm says the Tuesday-Wednesday storm will be much larger — and he's expecting it to last longer than the weather service is estimating — perhaps until 10 p.m. Wednesday — and then with some additional lake effect snowfall on Thursday.

He's estimating as much as eight inches total snowfall for the week — with the heaviest snowfall from noon until 10 p.m. on New Year's Day.

Maiworm says parking restrictions are a definite possibility with this storm — most likely occur on Thursday.

He says public works crews are standing by for a multiple-shift event.