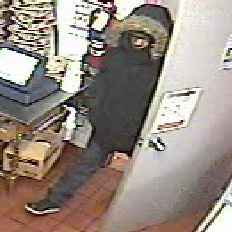 Evanston Police are investigating an armed robbery that occurred about 6:10 this morning at the Burger King restaurant at Dempster Street and Dodge Avenue.

A lone man armed with a handgun entered the restaurant just after it opened and approached two employees demanding money from the safe. About $1,000 in cash was turned over to the offender who fled out the rear service door.

An employee called police after the robbery and detectives are now reviewing video surveillance images from the restaurant.

The offender is described as a 5-foot-3- to 5-foot-7-inch tall black male with a medium complexion and build. He was wearing a black winter coat with fur around the hood.

Anyone with information regarding the armed robbery can contact the Evanston Police Department (847) 866-5000 or utilize Text-A-Tip anonymously by texting the keyword EPDTIP to 274637 (CRIMES) with text information.