Ken Raabe, a longtime Chicago entertainer, has rewritten the tale using aspects of “20,000 Leagues Under the Sea,” and the televisions shows “Gilligan’s Island” and “Survivor,” to create a twisted show filled with cannibals, evil media producers and cross-dressing dames. It may seem outrageous and that’s because it is.

The men and women at Piccolo Theater have learned how to create laughter. With “Robinson Crusoe,” the crew shows not only how to make people laugh but how to keep them chuckling all the way home.

Raabe, who is also part of the ensemble, began his career with the show’s director John Szostek by performing sketch comedy on small stages and in bars in 1973. Raabe later became a puppeteer and acted in the Emmy-Award winning show “Beyond the Magic Door.” He then went on to teach theater in special education classrooms and became one of the founders of the Piccolo Theater.

Szostek, one of the theater’s other founders, is directing his third Piccolo Holiday Pantos. He began his career in England before winning an Emmy Award with “Beyond the Magic Door” and later wrote “Chaos,” which was nominated for four Joseph Jefferson Citations and won Best Original Music. He later founded The Last Chance Circuz and, with Raabe, co-produced the science fiction comedy show Secret Circus. He directed “Servant of Two Masters” for Valparaiso University and received two Meritorious Achievement Awards for directing and mask design from the Kennedy Center American College Theater Festival. He was most recently honored with Evanston’s Artist of the Year award.

“Robinson Crusoe” runs at the Evanston Arts Depot, located at 600 Main Street, through Saturday, Dec. 20. Show times are Fridays at 8 p.m., Saturdays at 2 p.m. and 7 p.m. and Sundays at 3 p.m. Run time is approximately 90 minutes with one intermission.

Adult tickets are $25, seniors $20 and students and children under 10 get in for 15. For ticket reservations, family and group rates call the box office at 847-424-0089 or visit www.piccolotheatre.com.

Founded in 2001, the Piccolo Theatre embodies and realizes the human comedy through physical theatre, eloquence and humor in order to move, delight and transform audiences. In residence at the renovated Evanston Arts Depot, a cultural arts center in South Evanston, the comfortable 50-seat house perfectly immerses the audience in a distinctive little world, giving them a truly incomparable theatre experience. 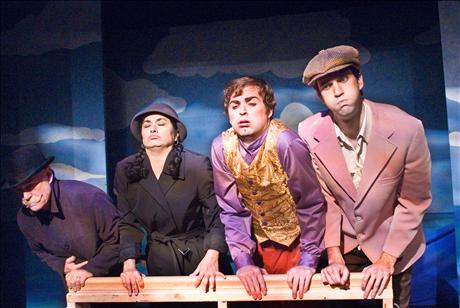