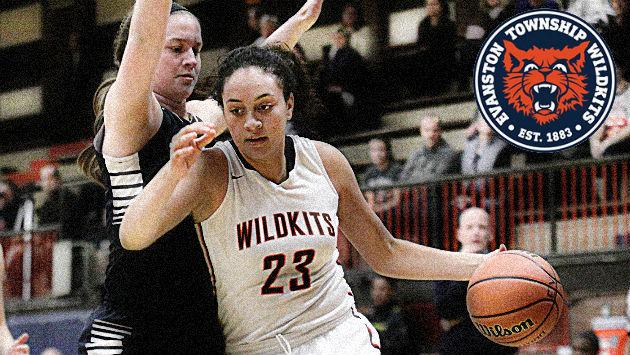 Better bench play is — or at least should be — the goal for any high school girls basketball coach as the season progresses.

That’s one more plus that Evanston’s girls were able to take away from their Senior Night celebration Tuesday night at Beardsley Gym.

Seniors Sade Chuckas (2 points, 2 rebounds), Abby Rosenbaum (4 points, 5 rebounds) and Helen Enghauser (2 points, 2 rebounds) shared the spotlight in the team’s final regular season appearance at home in a 70-52 rout of Highland Park in a Central Suburban League crossover contest. But the improvement of some of the younger players is what should give the Wildkits a boost as they try to maneuver what will likely be a difficult postseason path against state powers like New Trier and Trinity.

ETHS improved to 21-3 on the season and notched its 10th consecutive victory behind junior Leah Robinson’s game-high 20 points, 6 rebounds and 5 steals. And extended court time for freshman SyAnn Holmes (10 points, 4 rebounds) and sophomores Tamia Banks (season-high 9 points) and Amaiya Johnson (2 points) added up to a solid performance even when the usual starters were sitting on the bench.

“Tonight was really all about Helen and Abby and Sade, and nothing else really mattered,” Whitefield said. “All in all, I think it was a very positive experience for all of the girls.

“Winning 20 games again is obviously good, and something you want to strive for. But I’m really looking for us to get to that next level. I do know that we’re not 21-3 without that second group of girls and the focus they bring to practice every day, running the other team’s (opponents) stuff. I thought both Tamia and SyAnn did a nice job of running the floor and getting out on the break tonight. That second group practices together every day and they realize how much they need each other.

“Leah Robinson was in attack mode tonight, and when she’s in attack mode, she’s very difficult to handle. She’s probably the most athletic player on the team and we need that kind of effort from her again on Friday (at league leader New Trier). She’s been working more on her conditioning lately, and that means she doesn’t have to focus on how tired she is — she can just be a basketball player, like tonight. She got after the ball and she didn’t have to rest on defense.”

Evanston ran to a 44-23 halftime lead, converting 21-of-35 field goal attempts, or 60 percent. The layup drill continued into the third quarter, which ended with the hosts ahead by a 60-38 count.

“Our depth has really improved a lot,” Whitefield added. “Some of the girls have earned more playing time and I’m more confident putting them in now. The players always dictate how much they’re going to play. Tamia and Amaiya compete hard every day in practice, and SyAnn has been very, very good about continuing to work on her game, so I’d say our future looks good.”