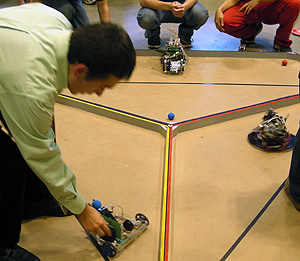 “We manage to break it about two hours ago,” said Dan Cornew, one of the robot’s creators.

Twelve teams vied for cash prizes, and the robots faced off in a hexagon-shaped playing field in the Engineering Design Center on Sheridan Road.

The hexagon was divided into three parts, and three robots competed in each round. The robots’ objective was to detect and remove ping-pong-sized balls from a section of the hexagon. 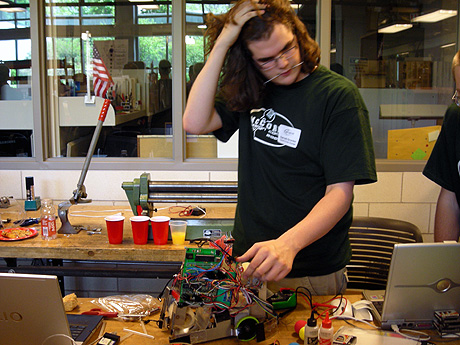 Caesar’s Funk Voyage was designed to toss the balls with a mechanism built from a paint roller and, like many of its counterparts, locate them with a laser. The robots came in various shapes and sizes, but they all moved around on makeshift wheels. And jumbles of exposed, rainbow-colored wires were a common feature.

Rick Dean, who won the first competition in 1992 and has returned for the event almost every year since, was impressed by the mobility. When Dean competed, the point was simply to recycle and sort materials. Dean hopes the next step will be walking robots.

“That’s the point of the competition,” Dean said. “To not know what you will build.”

Cornew and his teammates managed to recover from their initial accident. But, it turned out, Caesar’s Funk Voyage still never had a chance. It sat motionless while its competitors felt their way around the hexagon in one of the opening rounds.

“Greg forgot to program it to move!” Cornew bellowed as he left the field of play.

But Cornew’s explanation differed somewhat when asked about the failure.

“Basically, we forgot to turn it on,” Cornew said.