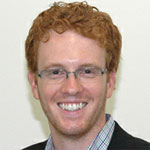 Robert D. Gregg, a Northwestern University postdoctoral fellow who conducts research on robotic-assisted walking, has been awarded a 2012 Career Award at the Scientific Interface from the Burroughs Wellcome Fund.

The award provides $500,000 over five years to support researchers in the quantitative sciences to pursue biological questions as they complete their postdoctoral training and transition to a faculty position.

“I am excited about this extraordinary opportunity to develop my research career at the boundary between biomedicine and robotics,” said Gregg, who is in mechanical engineering at the McCormick School of Engineering and Applied Science. “This support will bridge the gap between my current postdoctoral fellowship and my career as an independent investigator.”

Next year Gregg will join the faculty of the University of Texas at Dallas in the departments of mechanical engineering and bioengineering.

There are about one million lower-limb amputees in the U.S. today, and that number is expected to increase dramatically. Gregg’s current work addresses serious limitations in the capabilities of conventional prosthetic legs. He is translating new control principles found in the field of robotic walking into design and control methodologies for powered prosthetic legs.

“The Career Award at the Scientific Interface program provides an opportunity for postdoctoral fellows from the world of the physical and mathematical sciences to bring their insights to bear on perplexing biological problems,” said John Burris, president of the Burroughs Wellcome Fund.

Since the program began in 2001, a total of 89 awards have been made for an investment of nearly $45 million.