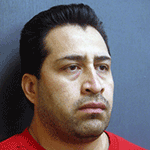 A Rogers Park man was ordered held on $90,000 bond today after Evanston police detectives executed a search warrant at his home and recovered what they say is 170 grams of cocaine.

Daniel Palomares, 32, of 7412 N. Oakley Ave. in Chicago was arrested during the raid early Wednesday morning in which police say they also seized about $2,000 in cash.

Palomares was charges with unlawful possession of a controlled substance and possession with intent to deliver.