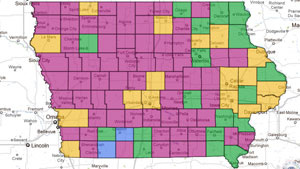 DES MOINES — It was an Iowa caucus night that came down to the wire, with former Massachusetts Gov. Mitt Romney and former Pennsylvania U.S. Sen. Rick Santorum running neck-and-neck for first place in the contest for the Republican presidential nomination.

DES MOINES — It was an Iowa caucus night that came down to the wire, with former Massachusetts Gov. Mitt Romney and former Pennsylvania U.S. Sen. Rick Santorum running neck-and-neck for first place in the contest for the Republican presidential nomination.

At 1:36 a.m. Wednesday, the Republican Party of Iowa declared Romney the winner by just eight votes over Santorum, the dark-horse candidate who ran his campaign on a shoestring budget. With all of the state's 1,774 precincts reporting, Romney received 30,015 votes to Santorum's 30,007. Percentage-wise, the two tied with 25 percent of the vote.

See an interative map of the results.

GOP officials said the caucuses do not provide an opportunity for a recount when there's a close vote, because it's an event run by the political party, and not the government.

The virtual tie led both candidates to make their speeches in advance of knowing the final results of the state's first-in-the-nation presidential nominating contest. The photo finish likely will give both Santorum and Romney momentum going into the Jan. 10 New Hampshire primary.

"Game on!" declared Santorum, who was Iowa's most frequent visitor this caucus cycle, spending about 100 days in the state but remaining at the back of the pack until a last-minute surge around Christmas.

"Thank you Iowa for the great send-off you're giving to us and the other winners of this campaign," Romney gushed, as he took the stage at Hotel Fort Des Moines to congratulate his Republican competitors and his own campaign.

Romney vowed to head to battle in New Hampshire, and to defeat President Barack Obama. in November in what he called an "election about the soul of America."

For Santorum, Tuesday's results were a near repeat of what former Arkansas Gov. Mike Huckabee did four years ago: A social conservative candidate coming from behind to win Iowa's first-in-the-nation presidential caucuses.

The crowd at Santorum's party at the Stoney Creek Inn in Johnston grew larger and more enthusiastic as the night drew on. They chanted, "Go, Rick! Go, Rick!!" and "We pick Rick! We pick Rick!" as they saw results coming in on TV. Showing their evangelical side, they also sang "Amazing Grace" and "God Bless America" as they waited.

Evangelical voters were key behind Santorum's success. Santorum was endorsed Dec. 20 by Iowa social conservative leaders Bob Vander Plaats and Chuck Hurley, after a campaign in which such voters were sharply divided on whether to support Santorum, Texas Gov. Rick Perry or Minnesota U.S. Rep. Michele Bachmann.

"I kind of believe in what he says, that we shouldn't settle on a candidate," said Jeremy Masterson, 33, of Prairie City, who attended Santorum's post-caucus party. "I believe in his conservative values. That's something we've kind of gotten away from here recently. Plus, the way he did it, the way he started from the ground up in visiting all 99 counties, it really tells me that he supports the people."

But Steve Scheffler, a Republican National Committee member from West Des Moines who's president of the Iowa Faith & Freedom Coalition, told IowaPolitics.com that he doesn't believe the endorsements were the reason for Santorum's surge.

"Even before endorsements, he was coming up in the pack," Scheffler said. "He laid a groundwork a long time ago. At the end of the day, people have a lot of respect for candidates who actually try to come and win their vote."

For Romney, Tuesday's win or near-win secures him as a national front-runner heading into the months-long process to secure the Republican nomination for president.\

"We're going to change the White House and get America back on track," he declared.

Kim Schmett of Clive, a former Polk County Republican chairman and congressional candidate who said he went to see most of this year's GOP presidential candidates 10 to 15 times, said it was Romney's experience as a business leader that made him decide to support Romney a week or two ago.

"He has the best chance to win," Schmett said. "There's too much at stake of where our government is headed, to not win this election. His skill set is almost perfectly matched for what our country needs at the moment."

An Iowa win was the outcome that Romney had hoped for in the 2008 campaign, when he spent more than $10 million in Iowa and campaigned in all of the state's 99 counties, only to finish second to Huckabee in the caucuses.

That cycle, Romney fought for the caucuses with 52 full-time staffers, but this time, he had only five, he told the crowd of 200 supporters who were invited to join his victory celebration.

Romney only spent about 20 days in Iowa during the 2012 caucus campaign and much less money, although his spending was boosted by the super PAC, Restore Our Future, which ran TV ads attacking former U.S. House Speaker Newt Gingrich of Georgia.

Combined, Romney and his super PAC spent more than $1.5 million on 2,246 ad spots in the Des Moines, Cedar Rapids and Quad-Cities markets, according to an analysis by IowaPolitics.com.

"Many of Romney's critics lambaste him for not paying enough attention to Iowa, not enough days visiting here in the last year," said former Iowa House Speaker Chris Rants, R-Sioux City. "But tonight Romney will see the fruits of the labor he put in four years ago."

Rants, a former senior adviser to Michigan U.S. Rep. Thad McCotter who last year briefly sought the GOP nomination for president, said Republicans want a candidate they trust. But he said even more so then four years ago, they also want a candidate who can win.

Texas U.S. Rep. Ron Paul, who was considered a contender to win, on Tuesday translated his loyal base of supporters and large, enthusiastic crowds into a strong third-place finish with 21 percent of the vote.

"It may make people take him more seriously on a national stage," said Dianne Bystrom, director of the Carrie Chapman Catt Center for Women and Politics at Iowa State University. "It will give him a boost, keep him in the campaign longer. I don't think he'll end up being the national nominee. He's the ultimate anti-government candidate."

Paul, who had attracted large crowds throughout the campaign, on Tuesday night addressed a crowd of several hundred supports, many of them young, at the Courtyard Marriott hotel in Ankeny shortly after learning that he came in third in the caucus. The Texas congressman said even though he brought home the bronze medal, his campaign pillar of very limited government won.

"Those are the issues that we have brought front and center," Paul said. "They're out there. They're not going away."

Paul's promise to cut whole federal government departments and end the war in Afghanistan are why Joe Stevens voted for Paul Tuesday.

"He's got a plan to balance the budget, to cut spending," Stevens said. "I think those are key."

Paul promised the roaring crowd that he will keep up his campaign.

"I think there's nothing to be ashamed of, everything to be satisfied (with), and be ready and raring to move on, on to the next stop," he said.

The Texas congressman had long complained that the media wasn't giving him the attention he was due, despite a close second-place finish in the Aug. 13 Ames Straw Poll, steadily growing public support in opinion polls and crowds as large as 1,000 that turned out to see him, especially on college campuses.

Many doubt whether Paul, who previously ran for president as a libertarian in 1988 and as a Republican in 2008, can go on to secure the Republican nomination for president. Fellow Republicans have been critical of his advocacy for ending all wars and bringing U.S. troops home.

Yet political analysts pointed out that while the caucus campaign has featured a "flavor of the month" ranging from Bachmann to Perry, former Godfather's Pizza CEO Herman Cain and Gingrich, support for Romney and Paul have remained steady at 20 percent or higher.

Gingrich finished fourth in the Iowa caucuses with 13 percent of the vote. "There will be a great debate in the Republican Party before we are ready to have a great debate with (President) Barack Obama," Gingrich said, while promising to press onward. He praised and congratulated Santorum for running a "positive" campaign and warned voters not to nominate Paul because of his "dangerous" foreign policy views.

Perry will return home to reassess his campaign after a disappointing fifth-place caucus finish, he announced Tuesday night. "I've decided to return to Texas, assess the results of tonight's caucus and determine whether there is a path forward in this race," Perry told supporters at his campaign's vote night headquarters.

Bachmann conceded a sixth place finish with 5 percent of the vote late Tuesday night, but sounded optimistic about the future of her campaign. She referred to her first-place Ames Straw Poll win in August and thanked the people of Iowa for "launching us on the path to victory." Bachmann suggested there could be "another Michele in the White House" in 2012, referring current occupant First Lady Michelle Obama.

The 2012 Iowa caucus campaign featured wild fluctuations in front-runners. More than 40 percent of likely Iowa Republican caucusgoers were undecided in the past week, saying they could change their minds about whom to support, according to a recent poll.

A few weeks ago, Santorum was at the back of the pack. But five polls released during the past week showed Santorum surging. He first appeared in polls in third place behind Romney and Paul. The latest polls showed him moving ahead of Paul in the final days before the caucuses.

Iowa Gov. Terry Branstad told IowaPolitics.com that he knew Santorum would do better than expected because he spent more than 100 days campaigning here and visited all 99 of Iowa's counties. Other political insiders and analysts warned in the weeks leading up to Tuesday's caucuses that Santorum could pull off a caucus-night surprise.

See a map of the caucus results: