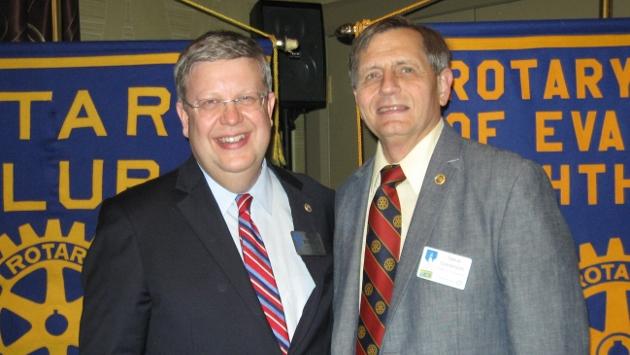 In a rare joint meeting Tuesday, Evanston’s two Rotary clubs installed their new officers for the year that begins July 1.

Members of the two clubs tend to consider themselves to be elite cogs in the Rotary wheel because they are located in the headquarters city of Rotary International, which oversees activities of nearly 35,000 clubs in more countries than are members of the United Nations.

The Rotary Club of Evanston, chartered in 1920 as the 734th club in the organization, meets weekly on Thursdays at noon at RI headquarters at Sherman Avenue and Grove Street.

The Rotary Club of Evanston Lighthouse, which was started by the noon club in 1985 as Rotary’s Club No. 22901, was the first breakfast club in the northern Chicago suburbs and meets on Tuesday mornings at 7:15 a.m. at the Hilton Garden Inn, adjacent to the city parking garage in the 1800 block of Maple Avenue.

Like all Rotary clubs, they function under the common motto of “service above self,” and conduct many projects, local and international, to help make the world a better place.

Both Evanston clubs, for example, collaborate with Campus Kitchens at Northwestern University to deliver food to the needy in Evanston. And each April, both clubs meet all day on a Saturday to help rehabilitate the home of an elderly, low-income resident in the city, painting walls, trimming shrubbery, and even putting in new kitchens.

Individually, the clubs conduct other projects in and around Evanston.  The Rotary Club of Evanston maintains the Rotary Friendship Garden along the canal just south of the Ecology Center.

The Lighthouse Club picks up trash along a mile-long stretch of Golf Road from McDaniel Avenue to Crawford Avenue and participates in the annual “beach sweep,” picking up refuse at Lighthouse Beach.

Each club also collaborates with clubs in other countries to perform service projects ranging from digging water wells in Africa to supporting orphanages in India. And they are both involved in Rotary International’s major initiative, Polio Plus, that is 99 percent close to eradicating polio worldwide.

Once a scourge that affected the lives of such notables as President Franklin D. Roosevelt and violinist Itzhak Perlman, polio is now active only in Afghanistan, Pakistan, and Nigeria, although no new cases have been reported in the African nation since April of 2014.

Both Evanston clubs welcome new members, both men and women, to their ranks.