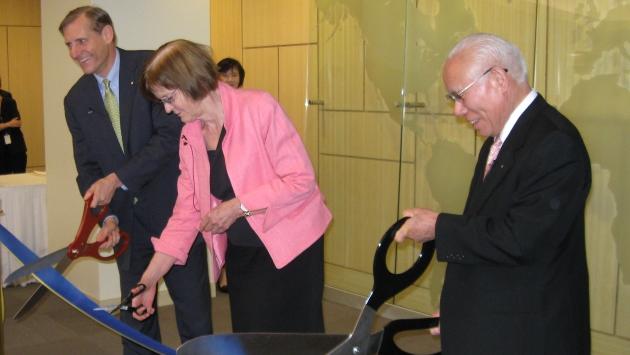 The state-of-the-art facility, located on the ground floor of the Rotary building at 1560 Sherman Ave., accommodates classroom seating for 100, with high-tech language interpretation booths and wireless functionality, according to John Hewko, Rotary’s general secretary, who served as master of ceremonies for the event.

“It’s a community forum with an international flair,” Hewko told about 100 people, including a number of Rotary staffers and civic leaders who gathered for the ribbon-cutting.

Mayor Tisdahl presented a key to the city to President Tanaka, but warned good-naturedly that “it really doesn’t unlock anything.”

She said that Rotary, one of the city’s major employers and taxpayers, was a “perfect partner” for Evanston, as they both share similar values of diversity and volunteer involvement.

Tanaka graciously accepted the symbolic key and noted in his remarks, spoken in Japanese, that he had served as grand marshal of Evanston’s Fourth of July parade last year.

Referring to the new conference center, Tanaka said “it gives me great pleasure that Rotary is opening its doors to Evanston just as Evanston has opened its doors to me.”

Also in attendance was Rotary International’s president-elect, Ron Burton, who will assume the presidency of the organization during its annual meeting next month in Lisbon, Portugal.

Because the Rotary leaders travel extensively during their terms of office, visiting many of the 34,000 clubs in 200 countries, the organization maintains apartments in Evanston to serve as a home base for both the president and the president-elect.

Founded in Chicago in 1905, Rotary’s world headquarters has been located in Evanston since 1954, Hewko said, with 550 staff members, fluent in 40 languages, located here.

Top: Cutting the ribbon to open the new conference center are Hewko, Tisdahl, and Tanaka.