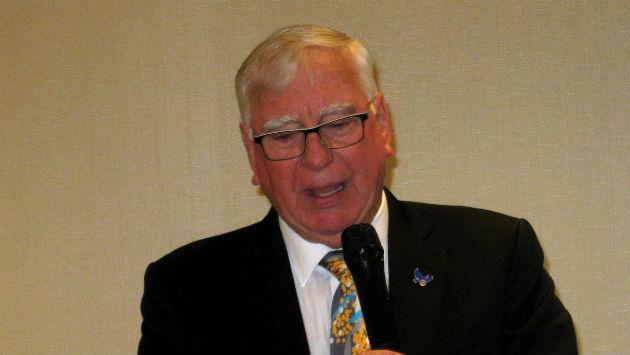 There are more than 35,000 Rotary clubs in more countries than are represented at the United Nations, so when the president of Rotary International is the speaker at your club’s meeting, it’s a big deal.

That was the situation at today’s regular weekly meeting of the Rotary Club of Evanston Lighthouse, which greeted the new president of R.I. this morning at the Holiday Inn at Sherman Avenue and Lake Street.

Ian H. S. Riseley, who hails from Down Under in Australia, is an accountant who is serving as the organization’s international president for the 2017-2018 Rotary year that began officially on July 1.

He made much of the fact that he is an accountant, so in his presidential year, he has vowed to add up not only the hundreds of millions of dollars that his members raise on such projects as the Lighthouse club’s annual Taste of Evanston that was held here on July 9 and netted $50,000 to be given away to worthy organizations in Evanston and throughout the world.

But he is also asking clubs to keep track of the hundreds of millions of hours of time that individual Rotarians the world over collectively donate to make the world a better place.

Next Saturday, for example, members of the Evanston club will be walking along Golf Road, from McDaniel Avenue to Crawford Avenue, collecting trash as part of a regular beautification initiative, just as they will participate in the Beach Sweep along the Lake Michigan shore in the fall.

You’ll recognize them as the same folks who gather with rakes and paint brushes in April at the home of a low-income resident of Evanston in an annual project they call Rebuilding Together.

Each year the R.I. president comes up with a theme for his year. Riseley chose “Making a Difference” as Rotary’s theme for his year in office. He explained that Rotary not only makes a difference in the lives of people it helps, but participating in these projects of doing good in the world also makes a difference in the lives of the Rotarians themselves.

One way he hopes to inspire Rotarians to make a difference is in the area of climate change. Riseley has challenged each Rotary club in the world to plant at least one tree for each member of each club.

Because Rotary is headquartered in Evanston, in the high-rise office building at the corner of Grove Street and Sherman Avenue, Riseley was speaking today just a block from his office, which enjoys a spectacular view, looking south from the 18th floor, with the Chicago skyline in the distance.

Rotary was founded in Chicago in 1905, and the first Rotary club is still in existence in downtown Chicago. Although it is a semi-rare treat for the two Evanston clubs to be the recipient of a visit from the head Rotarian, the original club, known as Rotary One, almost always registers such a visit.