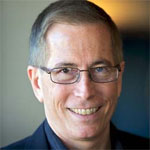 As CCO, Jensen will oversee a staff of 115 covering areas such as public relations, Rotary’s website, the award-winning Rotarian magazine, language services and other functions.

Major ongoing projects under the position include Rotary’s brand revitalization initiative and the coordination of internal and external communication functions linked to the rollout of Rotary’s new strategic plan, which identifies enhancing Rotary’s image as a top priority.

Jensen’s arrival comes at a key moment in the history of the 107-year-old organization headquarterd in Evanston.

Rotary is closing in on its top goal: the global eradication of polio. Rotary is a spearheading partner in the Global Polio Eradication Initiative, launched in 1988. Since then, Rotary and its partners have reduced the worldwide incidence of polio by more than 99 percent, from 350,000 cases a year to fewer than 700 cases in 2011.

“We are in the business of storytelling, and Rotary has great stories to tell — polio eradication being the perfect example,” Jensen said in a news release.

Rotary International CEO and General Secretary John Hewko said, "With the communication landscape changing almost daily, we need someone with David’s skills to identify new messaging opportunities, while making sure the messages themselves remain clear and consistent across every platform.”

Jensen held several communications management positions at GE, which he joined in 2001. Before that, he worked more than five years for the global public relations firm Ketchum, including a stint as general manager of the company’s Hong Kong operations. He also held communications positions at Boeing, Raytheon and Ampex.

In all, his corporate travels have taken him to 49 countries, international experience that fits well with Rotary, which supports more than 34,000 clubs in 200 countries and regions with a total membership of 1.2 million men and women.

“Having lived overseas and practiced public relations on five continents, I’ve found that 80 percent of what we do in communications works anywhere,” Jensen said. “But it’s that 20 percent that requires the extra effort to localize, based on local culture and practices, that makes it a home run.”

Jensen earned a bachelor’s degree in journalism at Arizona State University, is accredited by the International Association of Business Communicators and is a certified green belt in Six Sigma, the process-improvement methodology.