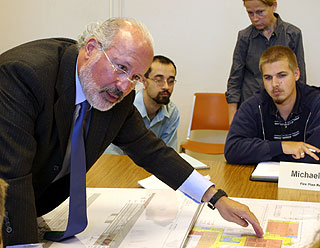 Roycemore School won unanimous support from a city committee today for its plans to turn the Methodist pension board building at 1200 Davis St. into a new home for the nearly century-old school.

The proposal next goes before a joint hearing of the Zoning Board of Appeals and Plan Commission to be held in November or December before an ultimate decision by the Evanston City Council.

The school’s plan preserves the exterior of the 1960s vintage pension board building, but would add a gymnasium on what’s now a surface parking lot, enclosed stairwells to provide additional exits required by the redesign and a driveway off Grove Street to reduce congestion at the existing Davis Street entrances.

Zoning Administrator Bill Dunkley told the Site Plan and Appearance Review Committee that the approvals are required because the school seeks to change the zoning of the property from office to residential and then request a special use permit for the school use.

Project architect Stephen Yas of Yas Associates in Evanston said the gym will have the same design elements as the existing structure, though with a different exterior finish that has yet to be determined. 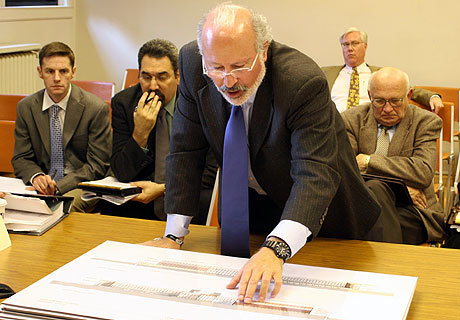 Architect Stephen Yas points to a rendering of the gym addition.

He said that school officials have had two meetings with neighbors of the site who have had no complaints about the plans.

Building and Zoning Director Jill Chambers said, "I think you’ve done a great job of blending the new addition with the existing site."

But she suggested that the location proposed for a play area for young children tucked into a niche of the building facade could be a problem because it likely will be shaded almost all the time.

Yas said an initial plan had the play area more exposed, but it was moved to provide better security.

The school’s headmaster, Joseph Becker, said the location needs some further thought. "It won’t be the kids complaining about the cold there, but the teachers, who aren’t running around," he said.

The Methodist pension board building

The committee also discussed whether permeable paving might be used on the new drive to reduce the amount of impermeable surface on the site and the possibility of adding a green roof to the gym addition.

Yas said the school plans to follow the LEED, or Leadership in Energy and Environmental Design, checklist in designing the project, but that whether the school seeks certification under the program will depend on budget constraints.

The school is seeking to move from its current location near the Northwestern University campus because its long-term lease from the university on that site will run out in a few years.

The pension board is planning to move its offices to a new building in Glenview.