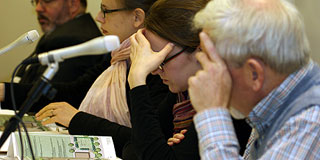 The neighbors, who all live in the 1500 block of Asbury Avenue, said they aren’t opposed to the sale of the building, now owned by the Methodist Pension Board, to the private Roycemore School.

But they said they don’t want to live across the street from property zoned R4, for medium density residential use.

The neighbors argued for rezoning the property from its current office zoning to R1 single-family zoning instead, but still allowing the special use for the school.

The neighbors said they feared that if Roycemore ever left the property they might be faced with the prospect of more dense residential development across the street.

Roycemore’s attorney, Steve Friedland, said the R4 zoning was suggested by city staff in view of the site’s location between single-family housing to the west and R6 high-density residential zones just to the east across Ridge Avenue.

"R4 is not a very dense zoning district," Friedland said. "The maximum number of units that would be permitted on the site," which occupies most of the block, " is something like 40."

"And if anyone ever were to proposed to do something like that they would need approval for a planned unit development under the city’s zoning code," he added.

But Friedland stressed that Roycemore has been at its current location for nearly 100 years and hopes to be at the new location just as long. 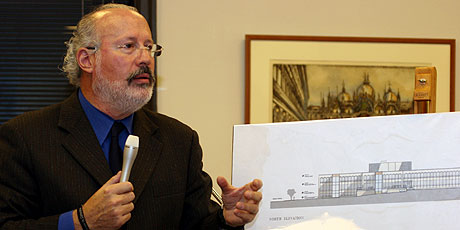 Top: Plan Commissioners study Roycemore rezoning documents during the meeting. Above: Roycemore architect Stephen Yas describes the plans, which include adding a gymnasium and two new staircases to the nearly 50-year-old pension board building.

At a joint meeting of the Zoning Board of Appeals and the Plan Commission, the neighbors also voiced some concerns about traffic from the new use and complained that they hadn’t heard about earlier public meetings on the plan.

But Roycemore board chairman Tom Ellis of 1110 Grant St. said the school had made extensive efforts to inform all neighbors, including hand leafleting and hiring a firm to make automated phone calls to all phone numbers within a 25-block area around the site.

Comments from members of the two boards suggested they have little fundamental objection to the Roycemore plan, but they sought more advice from staff about the best new zoning district for the property and more detail from the school about how it planned to handle cars arriving at the site.

The hearing on the Roycemore proposal will resume at 7 p.m. on Jan. 14.