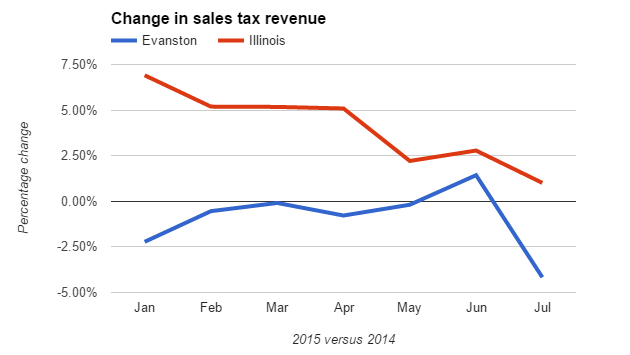 Retail sales growth in Evanston has lagged statewide averages every month so far this year, based on state revenue department figures for sales tax receipts distributed to local governments.

The state figures show that Evanston's sales tax revenue has been down compared to last year's level for every month so far this year except June, while the statewide figures have shown gains each month — ranging from a high of nearly 7 percent in January to a low of 1 percent in July. 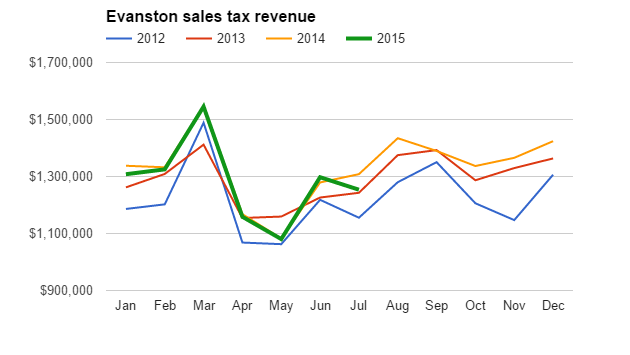 While Evanston's sales tax collections this year are up noticeably from two and three years ago, they haven't kept pace with last year.

At this point last year the city had received $9.05 million in sales tax revenue, compared to $8.97 million this year, a drop of just under 1 percent.

(The months shown represent the month the funds are distributed to municipalities, which is generally three months after the sales are made. So the annual peak in distributions typically comes in March and represents sales during the December holiday season.)

The decline has come despite the opening of 14 new businesses in Evanston during the second quarter — all of which filled existing vacant spaces — and a decline in the city's retail vacancy rate from roughly 10 percent to 9 percent between December and June.

City officials are hoping that the opening of two supermarkets late last month — Valli Produce and Whole Foods — in the spaces formerly occupied by Dominick's markets — will help nudge the retail sales figures into positive territory.