The Salvation Army plans to move from its current headquarters near downtown Evanston to an industrial building at 2425 Oakton Ave.

The Salvation Army plans to move from its current headquarters near downtown Evanston to an industrial building at 2425 Oakton Ave.

Architect Michael Dudley told city officials Wednesday that the religious organization plans to tear down part, or possibly all, of the existing building on Oakton. It would then build, or convert, the space into a chapel and Sunday School classrooms, and possibly a gymnasium for recreation programs.

He said the Salvation Army plans to operate a Head Start youth program at the site, but would not run a shelter or soup kitchen there.

Attorney Donald Whittaker said the army has an agreement to purchase the factory site, subject to approval of required zoning changes.

Mr. Dudley said the building on Oakton is part of the former Rustoleum Corporation site and is currently owned by the Tiara Corporation, a jewelry manufacturer. It was built in two stages in 1944 and 1955.

The front part of the building “isn’t much and would come down easily,” he said, but “the back is built like a bunker with reinforced concrete. If we can save some money and reuse the back part, we would like to do that.”

He said the army has been looking for a new location for four years but has had difficulty finding an affordable location. He said the group had also considered various scenarios for redeveloping the current building at 1403 Sherman Ave., but that because it is on a lot only about 90 feet square, those proved to be impractical. 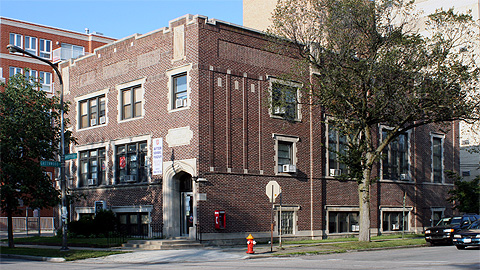 The new site has about six times as much land area as the army’s existing property.

Assistant Community Development Director Carolyn Brzezinski said the project “looks like a very good use for property in an underutilized area of Evanston.”

Mr. Whittaker said the army is having talks with Home Depot officials about gaining an easement at the rear of the new site to provide an alternate way for cars to enter and leave the property.

Assistant community Development Director Dennis Marino suggested that heavy traffic on Oakton would make access through the driveway at the front of the property difficult.

Mr. Dudley said the heaviest church traffic would be on Sunday morning, when other traffic on the street would be relatively light. Plans call for parking for 32 cars on the site.