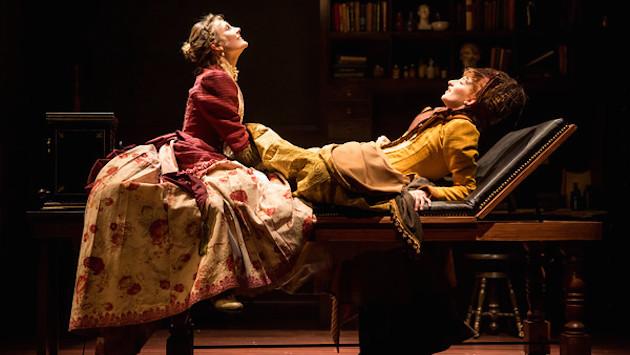 Sarah Ruhl is one of the most-produced playwrights of her generation. This month, two Ruhl plays are being staged in the Evanston area.

To get to the heart of what it is about Ruhl’s writing that is so magnetic, Evanston Now spoke with Sarah Ruhl.

First, Sarah, can you explain how you view “Melancholy Play” differently now that it's a musical?

What I love about it as a musical is that the emotional life of the piece is experienced musically; is scored, is already heightened. So the actors have to do less work, in a way, to bring the tone to life. And the experience of doing a musical absolutely makes me want to do it again. I sit at rehearsals and think: why don’t they sing again? why don’t they play the cello again? It makes scene work feel a little pallid and sad in comparison to full-throated song.

“Melancholy Play” is the first Sarah Ruhl piece to be transformed into a musical. It’s clear that her poetic language is well-tuned for music, and, as Polly Noonan put it, the musicality is “already there” in the play’s lines.

Do you feel that you may embark on other musical adventures in the future?

I’m in talks about doing a couple of different musicals in New York.

New York hasn’t been quite the same early-phase incubator that Chicago has been for Ruhl. Piven Workshop itself was a sort of training ground for Ruhl's early playwriting. Lauren Shouse noted that “Broadway would do things literally” in Ruhl’s plays, which can be okay, but lacks the intimate magic and creativity of the Chicago black box.

What do you think is unique about the Chicago theatre scene, and how has it been an incubator for your work, specifically?

Chicago is a singular theater town, a great theater town. The work here is profound and collaborative; the audiences are game and vivid and smart and love the theater. People make theater in Chicago because they love to, not in order to become famous. There is an intimacy and a depth in Chicago’s theaters. There is room for everyone. The sky is big and horizontal. There are theaters big and small. When I work in Chicago I feel that I’m at home.

Jessica Thebus has worked on many of your plays in the Chicago area, including "Stage Kiss" at the Goodman; Polly Noonan has worked as both an actor and a director on "Melancholy Play." What's the benefit for you of working with or seeing the interpretation of the same director/collaborator on your work over time?

It’s quite wonderful. You develop a short hand. You have more fun. And hopefully you take more risks, because there is also longevity and comfort and history. Jessica and Polly are two of my favorite people in this world. And then to be able to make work with them—it doesn’t feel like work. It feels like the most glorious combination of work, and play, and life. 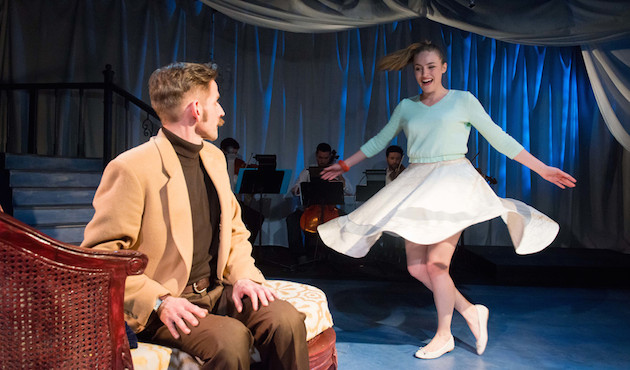 A scene from Piven's production of "Melancholy Play."

Ruhl’s plays span many styles of story, from mythology to personal memoir. She is notable for her poetic passion, but also for her unique outlook on story and the details the come with it.

I am particularly fond of your passion for existing stories, as in your adaptation of "Orlando" and your work with mythology in "Eurydice"- which is by no means a direct adaptation of the original. How do you approach adaptation in your work?

Well, I think I do two kinds of adaptations. Incredibly faithful ones—where I am essentially kneeling at the feet of someone I consider a literary master—like Virginia Woolf in Orlando or Anton Chekhov when I translated Three Sisters—and in that case I feel I’m just changing forms—from Russian into English, or from the novel onto the stage.

Eurydice feels like an entirely different proposition because there is no original text—apparently there was a tragedy based on Orpheus that was lost—so there are instead thousands of versions of myth. So I felt free in the case of Eurydice to blend the mythic with my own experience.

"Eurydice" is written for your father, I believe, and has an amount of imagined autobiography written into it. How do you separate your writing from your personal life- or do you?

That separation is so delicate. It’s a big question for any artist. That separation, between one’s writing and one’s life, is as porous as a sponge, as thin as a petal, as important and reversible as a zipper on a thick coat on a cold day. One needs it desperately. And also, it does not exist. Does that makes sense?

Lauren Shouse notes that, in a Ruhl play, you have to “trust that a stone is a stone” and not over-analyze it. There’s a “magical feeling of the Sarah Ruhl play,” and it embodies an emotional space.

Do you think of your work as operating in "magical realism"? Do you have an ideal description of your overarching style?

I get impatient with the compound noun magic realism although I love novelists who are called magical realists  (apparently many of them, like Marquez, also get impatient with the term). I do like magic. But I don’t like realism. And I don’t necessarily like getting cordoned off into any particular aesthetic and stuck there. I like fabulation, I like creating new forms and new worlds. I like starting new with every play and not knowing where it will end up.

I have a play that I wrote for my mother called “For Peter Pan on her 70th Birthday” which is being done at the Humana Festival next year and also at Berkeley Repertory Theater in the spring. And I’m writing away at a couple of other new plays, and editing galleys of some old plays. The Oldest Boy and my book of essays are coming out in paperback in the fall.

Also, speaking of Jessica Thebus, The Oldest Boy is being done on the west coast this fall, directed by Jessica, which I’m thrilled about. Jessica and I hope to do a fund-raiser for the aftermath of the earthquake in Nepal, as the play deals with Tibetans in exile in that part of the world.

To end with, here are the words of Ruhl admirer and director Lauren Shouse on her hopes for a Chicago production of Sarah Ruhl: “I hope for magic; there’s a communion in her work, ritual is important, and we experience that in her work, bringing people together and experiencing emotional hope. Chicago is the right place for her work because of that.”