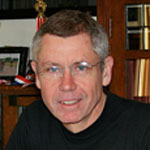 Northwestern University professor and Evanston resident James A. Sauls has been awarded the 2012 John Bardeen Prize for his contributions to the theory of unconventional superconductivity.

The John Bardeen Prize is awarded every three years for theoretical work that has provided significant insights on the nature of superconductivity and has led to verifiable predictions.

The prize recognizes Sauls’ work on the identification of the electron-pairing symmetry, pairing mechanism and multiple superconducting phases in heavy-fermion superconductors — superconductors containing elements such as cerium or uranium that have partially filled f-orbitals.

Sauls, a professor of physics and astronomy in the Weinberg College of Arts and Sciences, developed theories for superconductivity that occurs by the formation of bound electron pairs with parallel magnetic moments, or “spins.”

Much of his research focuses on understanding the role of symmetry of the superconducting electron pairs in predicting the electronic, magnetic, thermal and optical properties of unconventional superconductors, including high-temperature superconductivity.

He currently is investigating new types of superconducting circuit elements that might be realized from hybrid superconducting and magnetic materials. Such devices hold promise for a new generation of spin-based electronics, what he refers to as “superconducting spintronics.”

The John Bardeen Prize will be formally presented to Sauls and two others, Chandra M. Varma of the University of California at Riverside and Steven Allan Kivelson of Stanford University, Aug. 1 at the Conference on the Materials and Mechanisms of Superconductivity (M2S) to be held in Washington, D.C.

The award was established in 1991 by the organizers of the International Conference on the M2S in honor of John Bardeen, the father of the theory of superconductivity. The prize is sponsored by the department of physics of the University of Illinois.