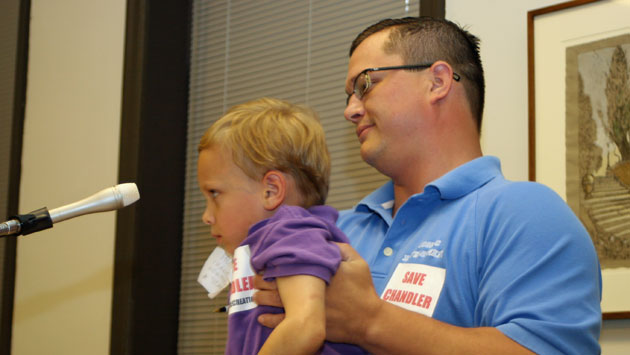 Evanston aldermen Monday night rejected a suggestion from City Manager Wally Bobkiewicz that the city explore the possibility of selling or otherwise revamping the usage of the Chandler-Newberger Recreation Center.

The decision came after dozens of people turned out to protest the idea that the center might be closed.

But the aldermen were more receptive to two other suggestions from the manager — that the city look for new ways to finance operations of the Noyes Cultural Arts Center, and that it explore the possibility of finding a new owner for the lakefront arts center. 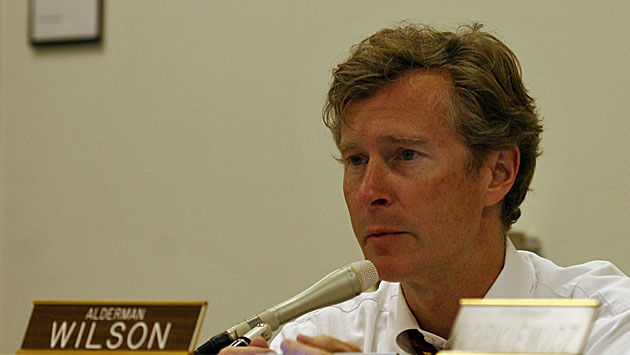 Top: Chandler backer Bill Bennett held up each of his two young sons — Luke and Hunter — in turn at the council speaker's podium to add their voices to the chorus urging that the center remain open. Above: Alderman Don Wilson introduced the motion to save the rec center.

Alderman Don Wilson, 4th Ward, said he was concerned about how the Chandler discussion arose — with some community residents hearing about it through the grapevine months before the idea of even considering possible new uses came before the council.

"This isn't the way to do things," Wilson said, "It throws people into a panic."

He said the city manager was simply following the council's directive to find ways to cut budget. "He just came up with one that I don't like," Wilson added.

Some speakers supporting the center said they'd be willing to see recreation program fees raised to more fully cover program costs. And some aldermen suggested that such increases may be necessary as the city tries to close multi-million dollar budget gaps over the next two years.

Alderman Coleen Burrus, 9th Ward, said she wanted to thank the manager "for looking for creative ways to balance the budget" and to look even at ideas that may be unpopular. "Somebody has to make hard choices and bring them to council to discuss," she added. 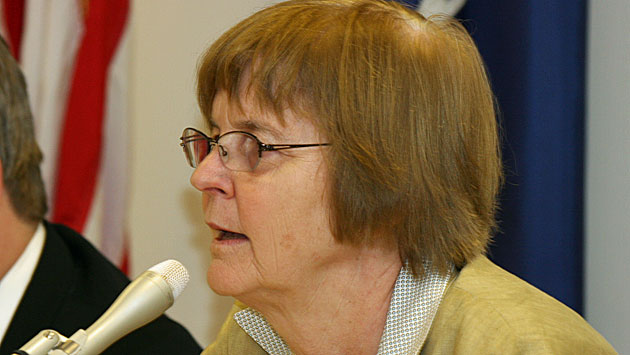 The artists who hadn't know about the meeting complained that they hadn't been told about the session.

But Tisdahl said anyone who'd said they were interested was invited to participate in the session.

The city doesn't have the funds to maintain the Noyes building, she said, and if the building continues to deteriorate the city may lose some of the tenants.

She said the arts groups have said they'd like a better theater in the building, but can't raise funds for it if they don't either own the space or have a very long-term lease for it. 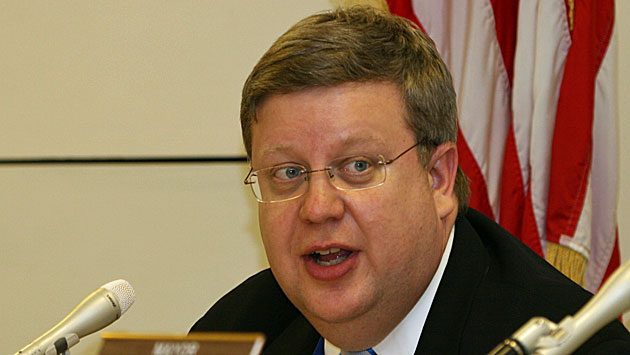 Bobkiewicz said its not his intention to cut Noyes, but that the city has serious capital issues and he's asking the council's permission to talk to the tenants about alternative solultions — an approach the aldermen ultimately voted to support.

Alderman Judy Fiske, 1st Ward, said she wanted to maintain the balance at Noyes between the arts groups and individual arts. She added that the center is important to the adjacent business district and that the building, designed by Daniel Burnham in 1892, should be a landmark.

The aldermen also voted to let the manager look for new uses for the Harley Clarke Mansion on the lakefront, which is now leased to the Evanston Arts Center.

That might include selling the mansion building, which needs a substantial amount of rehabilitation work.

Bobkiewicz said that because of limited parking at the site, and the need to preserve public access to the beach area, the potential new uses for the mansion building are somewhat limited — but he thinks there are some possibilities.