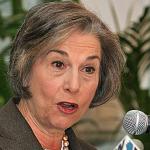 The U.S. House today approved a bipartisan budget deal, but U.S. Rep. Jan Schakowsky of Evanston was one of 32 Democrates who voted against it.

The budget agreement, worked out by Rep. Paul Ryan, a Wisconsin Republican, and Sen. Patty Murray, a Washington Democrat, is described by the New York Times as "a modest plan" to mitigate the impact of the across-the-board spending cuts called sequestration and slightly lower the budget deficit over the next decade.

Schakowsky, in a statement, said she favored a provision in the bill that would extend current Medicare payment rates for three months — at least postponing a cut of more than 20 percent to health care providers.

But she voted against the overall plan because it "doesn’t reflect the priorities of our country and doesn’t extend emergency unemployment benefits."

"If Congress goes home without acting, on Dec. 28 – three days after Christmas – 1.3 million people will lose their benefits," Schakowsky said.

The bill marked a breakthrough in that it saw Republican House Speaker John Boehner attack outside conservative groups that have treid to scuttle a budget deal.

In all, 163 Democrats and 169 Republicans voted for the measure. Schakowsky was the only lawmaker from Illinois — Democrat or Republican — to vote against it, although two two other Democrats — Danny Davis and Bobby Rush — did not cast a vote.

“Congress must pass a budget that invests in good jobs, the economy and education and that rejects proposals to cut pensions and retirement," Schakowsky said. "It is time to look at closing corporate tax loopholes. It’s time to ask corporations that shift jobs overseas, oil and gas companies, and private jet owners to contribute their fair share.”