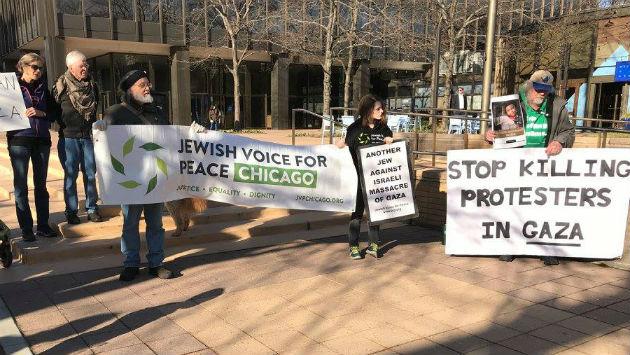 The news out of Gaza for the past few weeks has been horrifying, writes Lynn Pollack in this Viewpoint column.

The news out of Gaza for the past few weeks has been horrifying.

Most recently, on May 14 as the Trump Administration led a ceremony to officially move the U.S. Embassy to Jerusalem, tens of thousands of protesters in Gaza were targeted with live fire by Israeli military snipers.

By Lynn Pollack from Jewish Voice for Peace – Chicago

Reports indicate that just this past Monday, 60 were killed and more than 2,000 injured, bringing the death toll since March 30 to over 100, including an 8-month-old baby and other children, members of the press and medics.

As an American, I am outraged my tax dollars are subsidizing these crimes.  Last year, taxpayers in the 9th District paid for over $12 million worth of weapons in Israel’s arsenal.   As a Jew for whom values of justice are intrinsically connected with my heritage, I am appalled that Israel claims to do these things in my name.

I’ve lived in Evanston for forty years. I was drawn to this community in large part for the progressive values it embodies. Jan Schakowsky has been my representative in Congress ever since she was first elected, and over the years I have had countless occasions to feel proud that she has been a champion for these values in Washington.

That is why it is so painful to feel the disappointment that I do in the face of her uncharacteristic reticence to stake out a clear moral position in the face of Israel’s human rights violations.

Since March 30th, Palestinian in Gaza have been demonstrating as part of the Great March of Return. They are protesting for their internationally recognized Right of Return and for an end to the siege on Gaza.

Israel has responded with deadly force and horrifying violence killing more than 100 Palestinians and injuring around 10,000. On twitter, Amnesty International called Monday’s violence an “abhorrent violation of International law and human rights,” while Human Rights Watch called it a “bloodbath.”

To her credit, three weeks after the killings began and after hearing from her constituents, including members of Jewish Voice for Peace, U.S. Rep. Jan Schakowsky of Evanston joined some of her colleagues in “[calling] on the Israeli Defense Forces to immediately stop using deadly force against unarmed protestors.”

We need Rep. Schakowsky to use her moral authority to not only clearly, unequivocally, consistently condemn its actions, but to demand an immediate investigation into whether Israel’s actions violate US laws on human rights and weapons use, including the “Leahy Law,” which makes it illegal for the U.S. government to provide weapons and training to military units engaged in gross human rights violations.

As of this writing, her office has not issued a statement regarding Monday’s massacre.

This Friday at 4 p.m., I’ll be joining other members of Jewish Voice for Peace, constituents of the 9th district, and allies at Schakowsky’s Chicago office, 5533 N. Broadway, to recite Kaddish – the Jewish mourning ritual for the dead – and, in accordance with Jewish tradition, place stones on the sidewalk to commemorate each of the lives of the more than 100 Palestinians killed over the past few weeks.

I hope that by then, we’ll be able to celebrate her announcement that she using her platform to lead the charge in holding the Israeli military accountable for its actions.

Update 5/17/18: Rep. Schakowsky’s office this morning issued the following statement from the congresswoman regarding the situation in Gaza:

“Unspeakable tragedy has been unfolding in Gaza. Over the past few days, blood has been shed, lives have been lost, and the hopes of a lasting and peaceful two-state solution have been severely diminished.

“It is true that Israel has a right to defend itself and it is also true that Gazans have a right to protest nonviolently to bring attention to their plight. However, the killing of non-violent protesters can never be justified and, on the other side, Hamas has exploited Gazan demonstrations for its political gain.  Further, the Trump Administration’s decision to move the American embassy to Jerusalem on a day of such heightened tensions, outside of a peace negotiations process, only added fuel to a raging fire.

“This cycle of violence will continue until Israelis and Palestinians decide that enough is enough and seek a sustainable solution. It is past time to negotiate for two states, each recognizing the legitimacy of the other — an autonomous Palestinian state and a Jewish Democratic state living side by side in peace.”