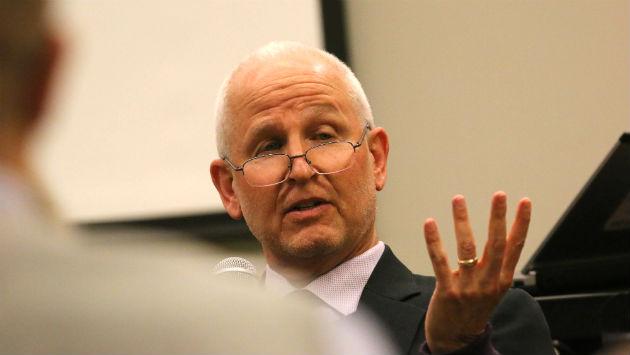 And Bruce Carruthers, director of NU’s Buffett Institute for Global Studies, said the average net cost of a college degreee has increased far less than the sticker price tuition figure that gets the most attention. 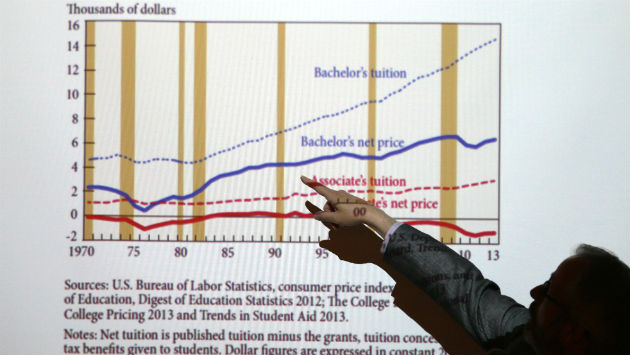 Carruthers with a chart showing the change in the net price of a four year degree since 1970 (the solid blue line) compared to the tuition “sticker price” (the dotted blue line).

Both speakers said conditions are much worse for students studying at proprietary schools — which typically rely much more on loans than grants for financial aid and whose graduates have much lower career success rates than those at private or public four-year schools.

Carruthers cited figures from the Pew Research Center that show typical student debt more than doubled in inflation-adjusted terms from 1992 to 2012 — from $12,424 to $26,885. And the proportion of college graduates who have debt increased from 49 percent to 69 percent during that time. 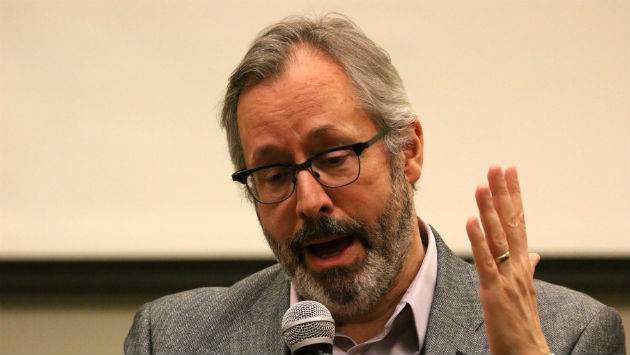 Schapiro, an economist who has co-authored several books on the economics of higher education, said that when he graduated from college in 1975, it took average college graduates 23 years to repay the direct and indirect costs of four years spent in school, compared to what they could have made in a blue collar job as a high school graduate.

Now, he said, it takes fewer than 10 years — mainly because the wages that high school graduates can command have failed to keep up with increased living costs.

The “sticker price” of college tuition has skyrocketed, Schapiro said, but only 14 percent of students pay that price. Most of those are from very weathly families — often from overseas.

At highly selective schools like Northwestern, Schapiro said, the inflation-adjusted average net cost of attendance has actually gone down over the last 15 years.

Asked whether students should opt to attend the best-rated school that will admit them, or choose a lower-ranked but less expensive school, Schapiro said studies suggest several factors to consider.

First, he said, for students from families earning less than about $140,000 a year, who might have to pay the sticker price tuition to attend, say the University of Illinois at Urbana, net costs might actually be lower at a school like Northwestern.

And, the answer is complicated, he added, because higher-ranked schools tend to have higher graduation rates and more students completing their undergraduate degrees on time in four years — which reduces the overall cost of attendance.

But assuming a student would get the degree in four years, he said, for white males the career outcomes don’t seem to change much based on the selectiveness of the school. White females, he said, see a slight advantage in going to the prestige school. For black females the advantage is larger, and for black males “it’s off the charts better.”

Schapiro speculated that one reason for the difference may be that having the degree from the top-tier school offsets some of the discrimination that minorities and women may otherwise face in the job market. It signals that this is a person who has the right “ticket” for success.