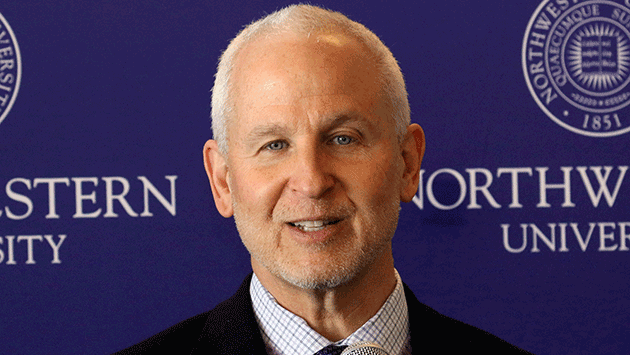 Here’s the text of his letter:

Dear members of the Northwestern community,

Over the weekend I received many messages of concern about protests organized by some of our students, among others, who are demanding the abolition of the Northwestern University Police Department.

We, as a University, recognize the many injustices faced by Black and other marginalized groups. We also acknowledge that the policing and criminal justice system in our country is too often stacked against those same communities. Your concerns are valid and necessary, and we encourage and, in fact, rely on your active engagement with us to make your school and our society equitable and safe for everyone. That said, while the University has every intention to continue improving NUPD, we have absolutely no intention to abolish it.

Northwestern firmly supports vigorous debate and the free expression of ideas — abiding principles that are fundamental for our University. We encourage members of our community to find meaningful ways to get involved and advocate for causes they believe in — and to do so safely and peacefully. The University protects the right to protest, but we do not condone breaking the law.

What started as peaceful protests have recently grown into expressions that have been anything but peaceful or productive. Crowds blocked the streets of downtown Evanston and nearby residential areas, disrupting businesses and local families, defacing property and violating laws and University standards. Some of the instigators appear not to be Northwestern students at all, but rather outside activists.

While the protesters claim that they are just trying to get our attention, that is simply not true. Several administrators — including our Provost, Deans, Interim Chief Diversity Officer and Vice Presidents for Research and Student Affairs — have held numerous discussions with concerned students, faculty and staff, and I am participating in a community dialogue tomorrow evening that was scheduled weeks ago.

Events in recent days seem to indicate an intent by organizers to escalate matters, and to provoke NUPD into retaliation.

I condemn, in the strongest possible terms, the overstepping of the protesters. They have no right to menace members of our academic and surrounding communities. When students and other participants are vandalizing property, lighting fires and spray-painting phrases such as “kill the pigs,” we have moved well past legitimate forms of free speech.

I want to offer a personal illustration of the pain these protesters have caused. Many gathered outside my home this weekend into the early hours of the morning, chanting “f— you Morty” and “piggy Morty.” The latter comes dangerously close to a longstanding trope against observant Jews like myself. Whether it was done out of ignorance or out of anti-Semitism, it is completely unacceptable, and I ask them to consider how their parents and siblings would feel if a group came to their homes in the middle of the night to wake up their families with such vile and personal attacks. To those protesters and their supporters who justify such actions, I ask you to take a long hard look in the mirror and realize that this isn’t actually “speaking truth to power” or furthering your cause. It is an abomination and you should be ashamed of yourselves.

An essential aspect of education is the discernment of actions and consequences. If you, as a member of the Northwestern community, violate rules and laws, I am making it abundantly clear that you will be held accountable.

If you haven’t yet gotten my point, I am disgusted by those who chose to disgrace this University in such a fashion. I especially condemn the effect of their actions on our friends, neighbors and other members of our community who are trying to sustain viable businesses, raise families, study and do research, while facing a global pandemic and the injustices of the world without losing their sense of humanity.

I remain as open and willing as ever to speak to any member of the Northwestern family who has concerns about the safety of this campus and everyone who is part of it. But I refuse to engage with individuals who continue to use the tactics of intimidation and violence.