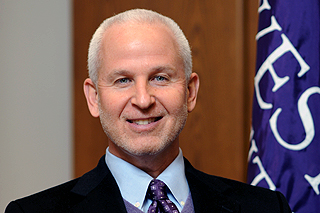 Schapiro, 55, a professor of economics and an expert on the economics of higher education, will become Northwestern’s 16th president, effective Sept. 1.

He succeeds Henry S. Bienen, who has been NU’s president for 14 years.

Patrick G. Ryan, chairman of Northwestern’s Board of Trustees, said that Shapiro, "with his passion for education and experience fostering cutting-edge interdisciplinary teaching and research" is a great match for Northwestern.

Northwestern’s Board of Trustees approved the selection of Schapiro Saturday.

"I am excited by the opportunity to serve as Northwestern’s president," Schapiro was quoted as saying in a university news release. "Northwestern has a long tradition of excellence, and I look forward to building on the successes that the University has achieved under the leadership of President Bienen."

"I will always treasure my experience at Williams, where I’ve learned so much," Schapiro added. "It will be difficult to leave Williams, one of the nation’s leading liberal arts colleges, but this is a tremendous opportunity to go to one of the best major research universities in the country. I very much look forward to being there and getting to know the Northwestern community."

Schapiro has been president of Williams, located in Williamstown, Mass., since 2000. For six years prior to that, he was the dean of the College of Letters, Arts and Sciences at the University of Southern California (USC), where he previously had been professor and chair of the economics department.

During Shapiro’s presidency Williams College has substantially reduced average class size, tripled the number of courses offered in the college’s signature tutorial program and completed a number of major building projects including a center for theater and dance, a student center, and new faculty office/classroom buildings.

William Osborn, a trustee and chair of the search committee, said Schapiro was the committee’s unanimous choice.

"His grasp of the issues facing higher education, the complexities of a research university, his impressive record of academic achievement and leadership, and his instant rapport with all the members of the committee made it clear that he was a perfect fit for Northwestern," Osborn said.

The university also released the following video with excerpts from an interview with Schapiro: