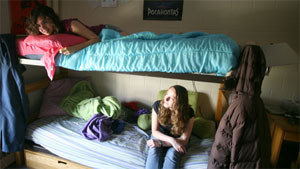 Schapiro, in an interview with the Dailly Northwestern, says the plans could involve adding room for as many as 1,000 more juniors and seniors in apartment-style housing on north campus.

He says the plan could include reuse of some vacant fraternity houses on Lincoln Street and the recently vacated Roycemore School building on Orrington Avenue.

Although dorms are a permitted use under the city's zoning ordinance for the Roycemore site, some neighbors have opposed housing students there, saying they fear problems with noise and traffic.

On the other hand, some neighbors in the broader area around campus have argued in favor of reducing the use of off-campus housing for essentially the same reasons.

Currently many NU students move off campus after a year or two in dorms to have more independence than dorm life provides.

Top: Less like this. An image of life in a shared dorm room from the NU Division of Student Affairs website.