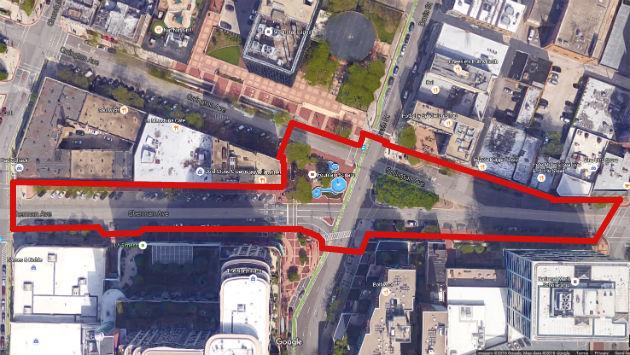 Design work for redesigning Fountain Square is scheduled to get underway this month, but it's expected to be two more years before the long-discussed project is completed.

City Manager Wally Bobkiewicz told residents at a 1st Ward meeting this week that under an $183,000 contract the City Council approved last week, Christopher B. Burke Engineering will develop design concepts for the project this spring to include a water feature and veterans memorial concept that were recommended during a visioning study conducted over the past two years.

Goals also include enhancing the pedestrian experience, improving the functionality of the intersection of Davis Street with Sherman and Orrington avenues for both cars and pedestrians and redesigning the plaza to accommodate a wider range of uses.

Bobkiewicz says the project offers a "once in a generation" opportunity to upgrade utilities under Sherman Avenue, which include a hundred-year-old six inch water main that the city plans to replace with a 12-inch one. And it will also provide an opportunity for private utility companies to upgrade their infrastructure along the two-block stretch of Sherman.

That likely means multiple phases for the work — with the street torn up for underground utility work in 2017 — and the rebuiilding of the plaza and streetscape around it not finished until sometime in 2018. That schedule is designed to make sure the project can be largely paid for with funds from the Washington National tax increment financing district, which is scheduled to end its 23-year life that year.

He said public meetings would be held later this year to get feedback on the design concepts, with a goal of selecting the preferred design by August.