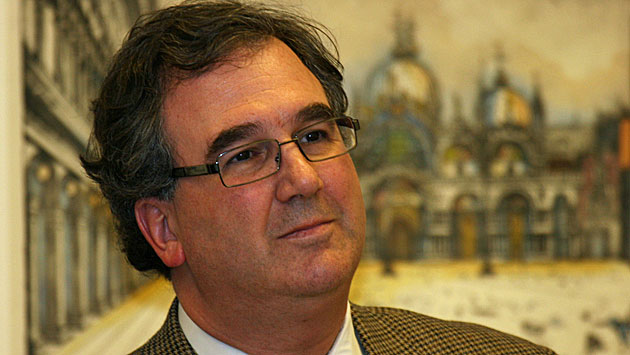 State Sen. Jeff Schoenberg of Evanston told aldermen Monday another round of state budget cuts is likely this year that "will impact core services for communities around the state."

State Sen. Jeff Schoenberg of Evanston told aldermen Monday another round of state budget cuts is likely this year that "will impact core services for communities around the state."

Schoenberg, who's retiring after 22 years in Springfield, said the budget picture is "sobering at best."

Making one of a series of presentations by local members of the legislature to the aldermen, he said Gov. Quinn's budget projections show only $162 million left over after nearly $34 billion in current spending to pay off just a tiny portion of the state's outstanding bills, which now total over $8 billion.

He said he believes both the House and Senate will end up cutting the governor's revenue projections and are unlikely to approve all the spending additions the governor has called ofr.

He said the state is planning to make $950 million more in payments into state pension funds above what it paid last year — and plans to pay it in full from current revenue without borrowing.

"But that crowds out our ability to fund some our most critical programs in areas like education, health, human services and public safety," Schoenberg added.

He said continued high unemployment levels mean more people are without private insurance — which drives up demand for the state's Medicaid program.

Schoenberg said former state Representative Julie Hamos of Evanston, who now heads the Illinois Department of Healthcare and Family Services, has been told by Quinn to reduce Medicaid spending by $2.7 billion, "and that's going to be a formidable challenge without directly addressing eligibility requirements."

If Schoenberg had any cheery news for the aldermen, it was that the talk of reducing state aide to local governments seems much more muffled this year than lasts.

"I attribute that to the fact that suburban mayors have alighned themselves with the new mayor of Chicago who's weighed in in opposition to that."

"So I don't think that's going to be confronting us in the months ahead," Schoenberg added.

Schoenberg said he supports the referendum before Evanston voters on March 20 seeking voters opinions on whether to abolish Evanston Township.

But he said the bill he introduced to provide a clear legal path to abolish the township has "rather minimal at best" prospects for passage, because township officials across the state have pledged their full opposition to it.

Shoenberg said he sees at best "a very modest upward increase" in the state's economy and revenues over the next three to four years.

"That means we will continue to have to find ways to squeeze every last cent of efficiency out of what we do, and do it at a time when more and more people will be calling on our help because the employment situation remains very challenging." 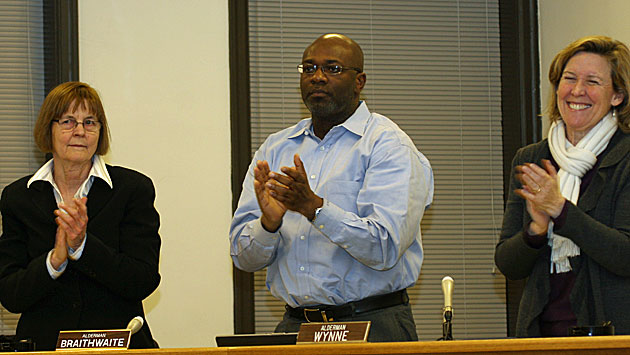 Mayor Tisdahl and aldermen Braithwaite and Wynne join in the standing ovation for Schoenberg.

Mayor Elizabeth Tisdahl praised Schoenberg for his efforts for his home town in Springfield — most notably securing state funds for replacing several of the century-old CTA viaducts in Evanston, and with that the aldermen gave him a standing ovation to thank him for his years of service to the community.

Evanston officials and activists travel to Springfield Wednesday to make their case to lawmakers and administrative officials for the city's funding priorities.